I know, I know!  You've all seen one or another stories on this topic already.  And it's been news, apparently, all over the world.  (Just check out the links that I'm going to give you below, though I am sure that a lot of them are all quoting from the same source or sources.  But I mean, really, the Las Vegas Sun?  In southern Nevada?)

What story is that, you ask?  Why the news about the unveiling of the new "conjugal coat of arms" for the Duke and Duchess of Cambridge, of course.  But since you've already seen one or more stories about it, why am I bringing it up here?  Because I have a complaint about it. 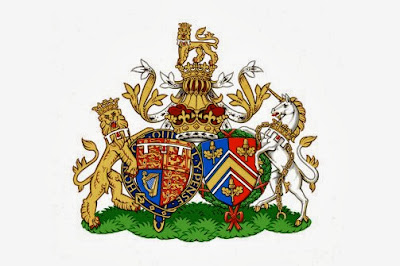 In brief, my complaint is this:  That is not a "new conjugal coat of arms"!

It is not even "a" coat of arms.  It is two coats of arms (neither one which can truly be considered to be brand "new") arranged in an heraldic display that can be called a marital achievement of arms, complete with helm, crest, coronet of rank, supporters, compartment, and some other external additaments (such as William's Garter).  The key word in that sentence being "external," that is, not a part of the "coats of arms."  A coat of arms is the shield and its colors and charges.  An achievement of arms has all that other stuff.  When you combine two separate and distinct coats of arms into a display of a marital achievement of arms, you get the kind of picture that all these news stories have been talking about, but you do not get a "conjugal coat of arms."  Have I made myself clear?

(And if I find out who started this whole "conjugal coat of arms" business -- and from one of the articles it may have been someone at Kensington Palace -- I'm likely to send them a "nasty-gram" and recommend - strongly - that the next time they speak about heraldry, they get it vetted by the College of Arms first!)

Now, about those links.  (Because, after all, even if misnamed, it is heraldry, and it's almost always a pleasure to see it discussed in the media, because it helps to remind people that heraldry is not relegated to the sphere of the antiquarian, but is a living art today.)