Heraldry in the Air

I don't know why I hadn't seen these before.  I mean, Southwest Airlines is based here in Dallas, Texas.  And they've always had a bit of "flair" in how they run their business and how they decorate their aircraft.  And I'd seen a couple of these uniquely painted planes before: the one (well, apparently, there's actually three of them) painted to look like Shamu, the orca, or killer whale; and the one painted as the Texas flag.  But the other day, I ran across some photos of some other Southwest planes, of a more heraldic nature.

While the airline seems to be sticking with the motif of state flags (of some of the states which they service), the flags of some states here in the United States can be heraldic.  For example, 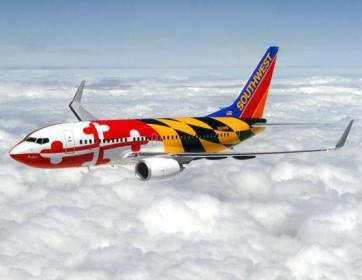 the State of Maryland, whose flag is the arms of the Calverts, Lords Baltimore, who founded the then colony.  (The state seal also features the Calvert arms, which consist of the quartered arms of Calvert, Paly or and sable, a bend counterchange, and Crossland, Quarterly argent and gules, a cross bottony counterchanged.) 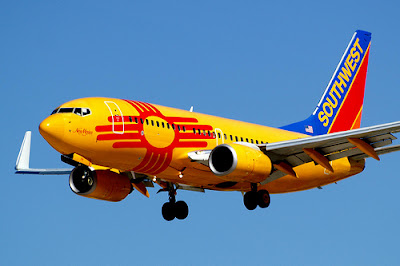 Another plane has the flag of the State of New Mexico, with a red stylized sun symbol, also looking (and acting) heraldic.

They also have Arizona, Florida, California, Nevada, and Illinois in addition to the others already noted above.  Information about Florida and the rest of their "Specialty Fleet" can be found on-line at: http://www.southwest.com/html/cs/landing/floridaOne.html

So if you find yourself near an airport serviced by Southwest Airlines, you might keep an eye out for one of these aircraft.  You could be rewarded by seeing some flying heraldry!
Posted by David B. Appleton at 6:00 AM