An article in My Town Crier dated August 22, 2012, is a brief look at Donald Black of Don Valley Village in Canada, a former attorney who now carves coats of arms as a hobby. (Large coats of arms; the heraldic panels with him in the photographs in the article appear to be about 4' x 4'.) 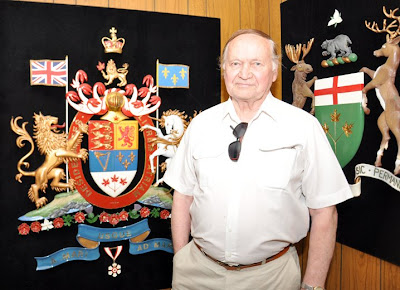 He says that some of his favorite pieces include those he has done for Osgoode Hall, Upper Canada College and the personal coat of arms he carved for former governor general Michaëlle Jean.  That piece is now displayed in a public school in Ottawa bearing her name.  “She said it was so impressive it would just be a shame if she kept it in her home,” he said. “She felt it should be on public display.”  The rendition just below of Ms. Jean’s coat of arms can be found in the Public Register of Arms, Flags and Badges on the website of the Canadian Heraldic Authority at: http://archive.gg.ca/heraldry/pub-reg/project-pic.asp?lang=e&ProjectID=929&ProjectElementID=3456 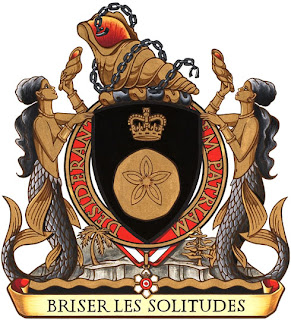 He clearly does some very nice work!  The full article about Mr. Black and his heraldic carvings, entitled “Hand carving coats-of-arms is his passion,” can be found on-line at: http://www.mytowncrier.ca/hand-carving-coats-of-arms-is-his-passion.html