There’s a post over on the Australian-based blog FeltySurface from April 15 that is entitled “The Origins of Branding – Heraldry in contemporary Australia” that is of interest.  The author, Michelle Tabet, talks about heraldry in relationship to the modern business concept of “branding.”  (As opposed to the cattle ranching concept of branding, as described in Hot Irons: Heraldry of the Range by Oren Arnold and John Prentiss Hale.  It's a great book - I have a copy in my heraldic library - but it's not quite the same kind of "branding.")

One comment in particular that she made really stuck with me: “The coat of arms is an aspirational composition of symbols and mottos that is meant to simultaneous[ly] define and guide the destiny of a place, person or family, how very similar to the way we use brands!”

And another: “To some extent, I gather that it is the historic value of the heraldry that make[s] it so special and worth coveting.”  Indeed so (in my opinion).

Her blog post arose from a conversation with a friend of hers and their discussion with the Knox City Council on brand strategy.  The City has the following coat of arms: 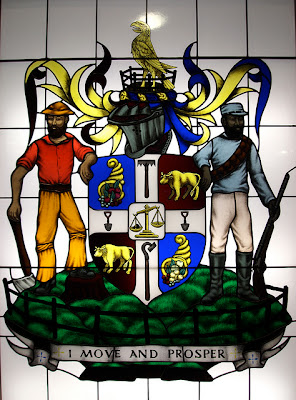 Which coat of arms she notes is appropriate for a largely rural 19th Century community, but does it still work for a 21st Century urban one?

She gives Dan the final word, or at least questions, for her readers (and now, mine) to ponder: “Why do we use medieval, 18th or 19th century institutions and customs to solve 21st century problems? What scope for reform is there within this categorical mismatch?”