... You can find heraldry everywhere.  And anywhere.  Even, it turns out, in a junk yard.

In an article in the Lancashire Evening Post of May 17, 2012, Queen Elizabeth II unveiled a coat of arms that had been recovered from a reclamation yard in Preston and then purchased by Ribchester businessman John Wade, who donated it to the town of Accrington. 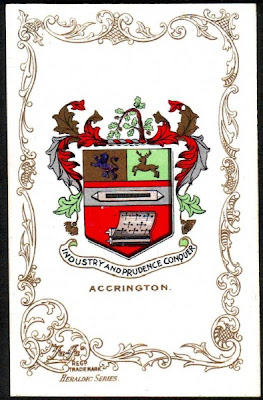 The coat of arms (shown here from an old series of postcards of British town arms) was granted to Accrington on August 26, 1879.

The full article, with a photograph of the Queen unveiling the arms as well as one of the carved shield itself, can be found on-line at: http://www.lep.co.uk/news/local/from-preston-scrapyard-to-the-queen-1-4559304