There's a news item over at Scotsman.com that the Lord Lyon King of Arms will soon be returning Leith's coat of arms to it.  (The story is a bit confusing in its terminology; it talks about the flag of Leith - which apparently has the town's coat of arms on it - and Leith's "historic crest" - once again abusing the term "crest" when they mean "coat of arms" - and make it sound like Lyon has had physical possession of the flag/crest when what is probably happening is that Leith, which had been absorbed into the City of Edinburgh, is being re-granted its historic arms.  But I digress.)

Councillor Munn, Deputy Lord Provost, said: "When Leith amalgamated with Edinburgh, the coat of arms fell out of use and was in the care of the Lord Lyon's office. Previously the Borough Council had it. Over the past decade or so there's been discussions about getting it back.  The letter I received ... from the Lord Lyon's office says they will be ready to hand the coat of arms back to the people of Leith in three months. It's quite exciting." 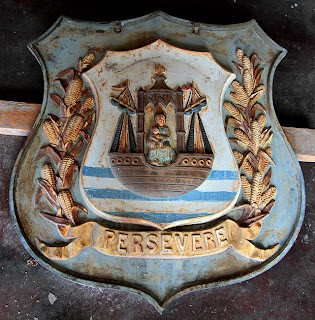 This is the historic coat of arms of Leith, with the Madonna and Child in a boat on waves of the sea.  (Thought the blue and white bars in base should properly be "wavy.")

Involved in the drive to reinstate the "flag" have been students at Leith Academy, which uses this variant of the Leith arms.

The full story can be found on-line at http://www.scotsman.com/news/perseverance_pays_off_as_coat_of_arms_to_fly_above_leith_once_more_1_2070359
Posted by David B. Appleton at 6:00 AM