If it is true, as is often said, that the descendants of Scots who do not live in Scotland are “more Scottish than the Scots,” how much more true is it if the “descendants” in question are cartoon characters?

I ran across a website the other day entitled The Clan McDuck by Sigvald Grøsfjeld Jr., which discusses the story of the fictional Clan McDuck found in some Donald Duck comic books (pardon me, I’m told they’re called “graphic novels” now).  One of the pages on that site was about “The heraldry,” the coats of arms designed by the writer, Don Rosa, one for 1991 in a story entitled “The Last of The Clan McDuck” ...

... and the other in 2003 in a story entitled “A Letter From Home or The Old Castle’s Other Secret.” 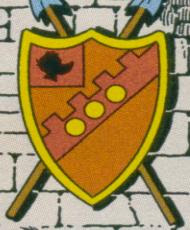 If you’d like to learn more about either of these two "McDuck" coats of arms, comments by Don Rosa about his view of the designs can be found at: http://duckman.pettho.com/mcduck/heraldry.html.

Post Script:  As I was in the process of typing up this blog entry, I found that Kimon Andreou's  had also posted about the McDuck coat of arms on his blog IDTG.  (Great minds think alike, I have to assume!)  You can read his post at: http://www.idtg.org/archive/1795-mcduck-coat-of-arms/
Posted by David B. Appleton at 6:00 AM