In a news article from Reuters on February 3, 2012, inmates at an unnamed correctional institution who were producing decals with the state’s landscape “coat of arms” for use on police cars had pulled a prank on the police.  The cow in the image, often shown as a solid reddish color (see images below) but  shown in the decal as spotted, had one its markings changed to the outline of a pig, a derogatory word sometimes used for police.

Here is a copy of the official design in black and white ...

... and here’s a color version of it.  (The snow-capped mountains seem to have no fixed color; in some images they are green;* in others, like this one here, they are purple.) 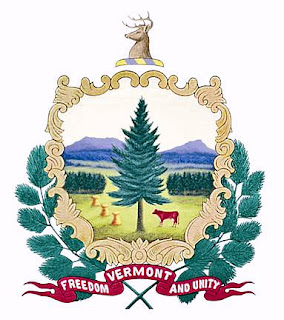 Now here’s the decal that was created by the inmates which were being placed on police cars and cruisers.  Once you know to look for it (on the cow's shoulder), the pig (heraldically, statant turned to sinister) is pretty obvious. 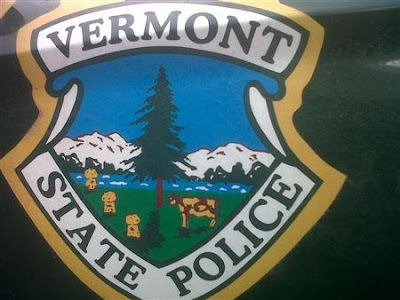 The story from Reuters can be found on-line at http://news.yahoo.com/vermont-inmates-hide-pig-official-police-car-decal-004403610.html

Other sources reporting on this story can be found at:

Heraldry at work in the 21st Century.  You gotta love it!


* Indeed, the name Vermont itself comes from the French vert mont, “green mountain.”
Posted by David B. Appleton at 9:04 AM

Email ThisBlogThis!Share to TwitterShare to FacebookShare to Pinterest
Labels: Vermont