Today, March 16, is the date on which, in 1802, President Thomas Jefferson signed a measure authorizing the establishment of the U.S. Military Academy at West Point, New York.  The coat of arms of the Academy are: 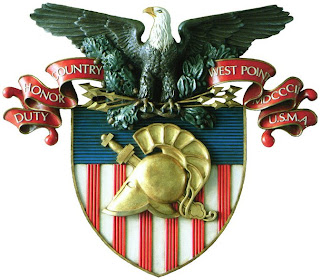 Now, admittedly, the coat of arms (and motto) of the USMA are not as old as the establishment itself.  According to the Academy's website discussing its coat of arms at http://www.usma.edu/PublicAffairs/Press_Kit_files/inaugcoatarms.htm, "the coat of arms and motto were adopted in 1898. Col. Charles W. Larned, professor of drawing, headed a committee to design a coat of arms for the Academy and stated several criteria for the design. The committee decided that the design should represent the national character of the Academy, its military function, its educational function and its spirit and objectives."

Alas, the committee turned everything on the coat of arms and the crest to sinister (to the viewer's right), instead of the usual heraldic default, to dexter (to the viewer's left).  Nonetheless, it did get fixed later.  "The coat of arms was used without change until 1923, when Capt. George Chandler, of the War Department, pointed out to Superintendent Brig. Gen. Fred Sladen that the eagle and helmet faced to the heraldic sinister side. The helmet, eagle’s head and sword were soon turned to their current position."

Since that time, the Academy's coat of arms has been used extensively, and can be found on many of the buildings at the site, on their website, and on much memorabilia from there.
Posted by David B. Appleton at 11:21 AM