Ecclesiastical Heraldry in the News

An interesting article appeared over the weekend (Saturday, March 20, 2010) discussing the upcoming installation of a new bishop at the Corpus Christi Cathedral in Corpus Christi, Texas.  Among the other items discussed in the article (which can be found on-line at http://www.caller.com/news/2010/mar/20/changing-of-bishops-steeped-in-ceremony/) are the new bishop's cathedra (chair, or throne) and his coat of arms. 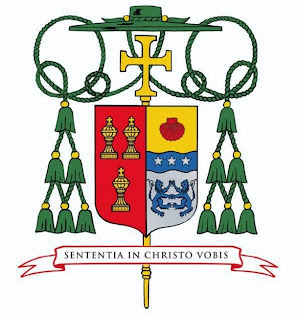 W. Michael Mulvey's ordination and installation of Bishop of the Diocese of Corpus Christi will take place today, March 25.  His new cathedra is being made by a local Corpus Christi furniture maker, and his coat of arms has been designed by Deacon Paul Sullivan of the Diocese of Providence, Rhode Island.  As is usual, the arms of the Diocese appear on the dexter side of the shield (to the viewer's left), and the new Bishop's personal arms appear on the sinister side (to the viewer's right).  According to the article, the symbolism of Bishop Mulvey's arms are as follows:


"The upper portion is gold with a red scallop shell taken from the coat of arms of Pope Benedict XVI, also a symbol of baptism. The lower portion has two blue lions taken from Mulvey’s family coat of arms.  A blue wavy bar across the center represents the Colorado River that runs through the Diocese of Austin, where Mulvey served for 35 years. The bar has three silver stars that symbolize the Holy Trinity."

The motto, Sententia in Christo Vobis, comes from Philippians 2:5, and is translated as “Serve others the same way you would serve Christ.”
Posted by David B. Appleton at 6:00 AM