An Innovative Use of Heraldry

The Eden Spiekermann group, which redesigned The Economist in 2001, recently developed the logo below for the Netherlands province of North Holland. The conjoined legs of the ‘N’ and ‘H’ integrate the province’s coat of arms. 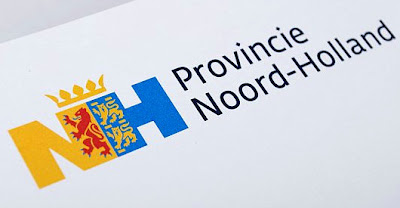 Now this is a logo which I, as an academic herald, can support.  It's modern, but it doesn't just toss out the historic heraldry as so many logos do.  Rather, it incorporates the heraldry into the design, for a refreshing update.  Hoorah!  (Now if we could only get more graphic design firms to do similarly.)
Posted by David B. Appleton at 6:00 AM