A recent article in the Toronto Sun noted the sale this summer of an early version of Canada's former flag.  This Red Ensign, dated 1868, consists of a red ground, a canton of the Union Jack, and in the fly a quartered shield containing the arms of the founding provinces of Canada: Ontario, Quebec, New Brunswick, and Nova Scotia. 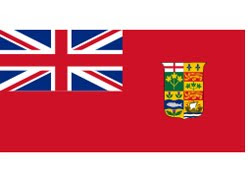