An article last week in the Orangeville Citizen of Dufferin County, Ontario (dated February 25, 2010), gives a bit of the history of Dufferin County's flag, and of the coat of arms which is so prominent upon it. 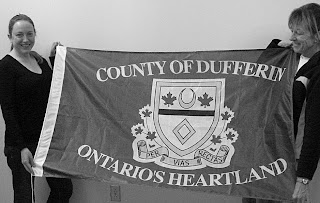 I found the article interesting for the interesting mix of accurate information and errors.  Among the latter, ones that I found of particular note are the use of the French "Marquis" rather than the English "Marquess"; the note that "the middle bar [that is to say, the fess] became solid" when a fess, unless otherwise described, is always "solid"; and the inferred belief that the "maple leaf sprays" added outside the shield are somehow a part of the coat.  And no mention at all is made of the bordure which has been added to the arms.  Still, it's a nice article and gives a fair bit of the history of the flag (and the coat of arms).  If you would like to read it for yourself, it can be found on-line at: http://www.citizen.on.ca/news/2010-02-25/Mailbox/History_of_the_Dufferin_County_Flag.html

One thing that they didn't note in the article is exactly what the arms of the Earl of Dufferin either looked like or were blazoned.  So, naturally, I went hunting.  In Burke's General Armory, the arms of Blackwood, Earl of Dufferin, are given (in the first quarter of a quarterly coat) as: Azure, a fess or, in chief a crescent argent between two mullets or, and in base a mascle argent.  [I try to avoid the difficulties inherent in the old English blazons of not repeating a tincture but forcing the reader to count tinctures back from the beginning of the blazon by describing repetitions as "of the first", "of the second", "of the third", or "of the field".  It can be confusing, and sometimes leads to some pretty obvious errors when the arms are drawn from the blazon.  Since not even the College of Arms in London retains this awkward system, but just goes ahead and repeats the name of the tincture where needed, I have altered the blazon from Burke's to reflect this practice.]  From the description in the article, the mullets in the Earl's arms are pierced.

I also noted an error in Burke’s for another Blackwood, Baronet, descended from a younger son of Sir John Blackwood, Bart., by his wife Dorcas, Baroness Dufferin and Claudeboye, whose arms are blazoned: Azure, a fess or, in chief a crescent argent between two mullets or, and in base a mascle “of the field”, thus making the mascle effectively invisible (blue on blue).  (Though that would certainly make drawing it a lot less work!)
Posted by David B. Appleton at 6:00 AM