Fellow American Heraldry Society member Rev. Guy Sylvester has put up a couple of images of heraldry related to Thanksgiving on his blog, Shouts in the Piazza, at http://shoutsinthepiazza.blogspot.com/2009/11/thanksgiving-heraldry.html  He's got the early seal of Plymouth Colony there, and a rendition of the arms of Franklin Delano Roosevelt, who set the fixed date for Thanksgiving as national holiday.

In keeping with the theme, I thought I'd add a couple more coats relating to, if not theThanksgivinging holiday proper, at least with those hardy souls who survived the first winter in what has since become the Commonwealth of Massachusetts and celebrated a Thanksgiving feast sometime in the fall of 1621. 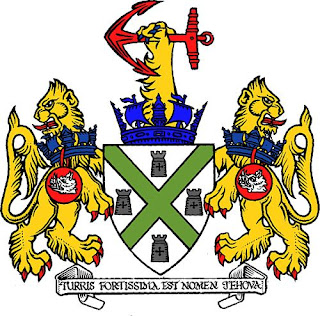 First is the arms of the city from which they sailed on the Mayflower and the Speedwell (alas, poor Speedwell.  Its name did not match its abilities), and for which they named their new colony in America: Plymouth, England.  Coincidentally, the arms of the city of Plymouth were recorded in 1620, the year the Mayflower sailed from there.  The lion supporters, though not officially granted until 1931 (as was the crest), were sometimes used earlier. 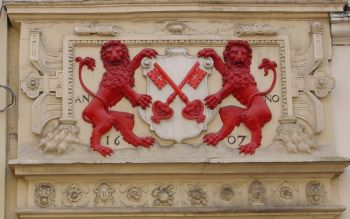 The other coat of arms is that of the city in which a number of the Separatists (those whom we now usually refer to as "Pilgrims") lived after leaving England but before making the decision to cross the Atlantic and begin a new colony in what was to have been northern Virginia (actually someplace near to what is now New York City).  So they left Leiden aboard the Speedwell, met up with others and the Mayflower in England, thus making, for many of them, Leiden as their first port of emigration.