The First Coat of Arms

No, no, not the “first three coats of arms in the world” that you can sometimes find in Renaissance, especially in Renaissance German, armorials (for example, Virgil Solis’ Wappenbüchlein, published in 1555). No, I’m talking about what is generally accepted to be the very firest coat of arms, used in an hereditary way*, borne first by Geoffrey le Bel, Count of Anjou (1113-1151), and later by his grandson, William Longspee, Earl of Salisbury (ca. 1176-1226), here as shown on their tombs.

* Heraldry has been defined by A.R. Wagner as "The hereditary use of armorial devices centred on the shield." (If I'm remembering it correctly.) 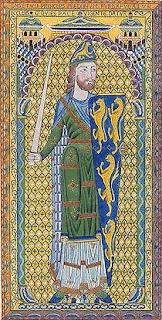 Why is this of special interest to me, as an academic herald? Well, you know I’ve been posting for the past week about my new-found connection to Edward III, King of England. (Again, this is not an especially big deal; it’s estimated that 80% of people with British ancestry have the prolific Edward somewhere in their family tree.)

But it means that not only do I happen to enjoy activity in what I (in my own quiet, understated and pseudo-humble way) consider to be one of the greatest hobbies in the world (heraldry), but that I have a family connection to the very earliest days of the use of heraldry.

And I’d thought that no one in the family had ever used a coat of arms. That’ll teach me to make assumptions like that. It turns out that someone in the family, my 25th great grandfather, used the very first coat of arms!
Posted by David B. Appleton at 8:30 AM

Email ThisBlogThis!Share to TwitterShare to FacebookShare to Pinterest
Labels: family