Well, it looks a little like heraldry, anyway. The Twilight phenomenon, recently accelerated with the release of the second Twilight movie, New Moon, has also stirred interest in some of the lesser-known aspects of the stories, including the Cullen family “crest” (for an example of which, see the image below. A ring gives the same arms, but with a red background), and a jewelry designer in Portland which creates pieces for the two, soon to be three, movies. 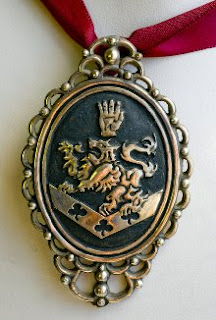 There’s a nice article about Artisan’s Designs, a Portland firm which created the original jewelry pieces for the movies, and which also does upscale reproductions for fans, on the website of The Oregonian at http://www.oregonlive.com/movies/index.ssf/2009/11/portland_designers_craft_jewel.html
Posted by David B. Appleton at 8:30 AM