I was sitting down after a long hard day of talking to people about heraldry (well, okay, for those of you who know me well, it _wasn’t_ hard. I drove to Tyler, Texas and gave a presentation on heraldry and some Mayflower passengers who are believed to had the right to or used coats of arms. But I digress) and was kicking back and relaxing watching one of my favorite shows, the Discovery channel’s Mythbusters. Why is that show one of my favorites? Well, anytime you can mix myths (some urban, some not), science, and explosives, you just know it’s gotta be a good show.

Anyway, in this one segment they were attempting to recreate a 19th Century naval battle off the coast of South America, where one of the two ships ran out of cannon balls and substituted balls of cheese to shred the other ship’s sails (effectively immobilizing it). At one point during the set up for this attempt, they showed, _very_ briefly, a flag that had the word “Mythbusters” on it between two “coats of arms”. Now, I’ve said this before, and I’ll say it again: sometimes, I really _love_ some of the things you can do with modern technology. Because I was able to go out on-line and find a clip of that episode, play it, pause it at the right place, and do a screen shot of that flag. And here it is. 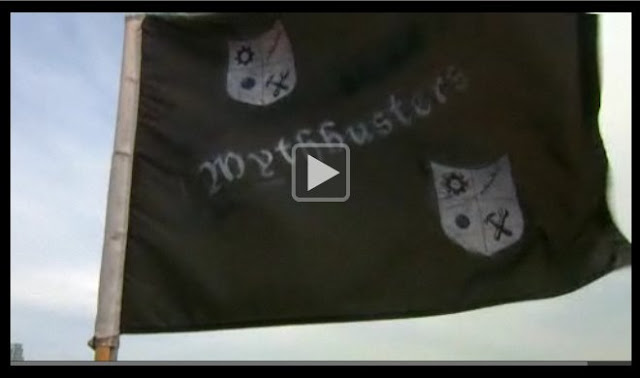 For a blazon, the best I can do is: Quarterly, first, Argent, a cogwheel sable; second, Argent, the word “Mythbusters”[?] in bend sinister sable; third, Argent, a roundel [perhaps symbolizing the globe?] sable; and fourth, Argent, a crescent wrench bendwise sinister per bend sinister argent and sable, the argent portion fimbriated sable, and in bend a claw hammer sable.

So, it’s not “real” heraldry. And it’s not even particularly good faux heraldry. And yet, it’s another demonstration of the fact that coats of arms have become an integral part of our culture and are still finding uses even here in the 21st Century. And I find that fact to be very cool!

Oh, and idea of using cheese as a substitute for cannonballs? If it’s a hard enough cheese that isn’t “brittle”, that is, it retains a fair bit of elasticity, yup, it’ll go right through a canvas sail when shot from a cannon.
Posted by David B. Appleton at 8:30 AM