For this final post on heraldry in the heartland of America, we leave Omaha, Nebraska, and go a few miles south to Topeka, Kansas.
I first saw this coat of arms on a very large water tower as I exited the interstate at Topeka on my way to Omaha, but did not have my camera out and had no place to decently stop to get it. On the drive back, I was prepared! Immediately after collecting my toll ticket at the gates, I pulled over to the shoulder of the road, turned the camera on, took the lens cap off, stuck my head out the window, turned so I was facing backwards, and grabbed two quick shots of the water tower. (I must admit, I do like the autofocus feature of my current camera.)
And here’s the (cropped) result. 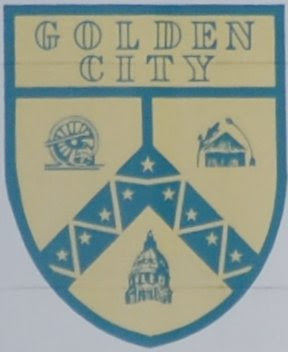 These "arms" also show up on the flag of the city (about which - that is, the flag - more information can be found on the Flags of the World website at http://www.fotw.net/flags/us-kstpk.html).
It’s difficult to find more information about the arms themselves. Unfortunately, despite its prominent placement on the water tower, the City of Topeka does not seem to show its coat of arms anywhere on its website, nor does it explain the meaning of the various elements on the arms. Here’s the little I have been able to glean, plus some of my own speculation about the arms. The stars on the chevron represent the city’s founding fathers (according to a website about the nuclear submarine USS Topeka). The charge in dexter chief appears to be a locomotive engine wheel, and the railroad was certainly a large factor in the development of the city. The charge in base is the capitol dome; Topeka is the capitol city of Kansas. For the rest, well, your guess is very likely as good as mine.
Posted by David B. Appleton at 8:30 AM