I had the opportunity over Labor Day weekend (September 3-5) to attend a conference in Omaha, Nebraska. I was more than happy to go, if only because it was another opportunity to do something I really enjoy: talk about heraldry. There were more reasons than that to go, of course, but still ... I got to talk about heraldry and listen to others talk about heraldry. And for an academic herald, it really doesn’t get much better than that. (Well, maybe if they’ve got pictures, too!)

But as I always try to do when I go someplace new, I dragged out my camera and went looking for representations of coat armour, or at least things that look somewhat like heraldry. And I found some. More, in fact, than I had expected to find, considering that Omaha is not, compared to many cities around the world, all that old. (There’s an old joke about the difference between Europeans and Americans that has a lot of truth in it: Europeans think that a hundred miles is a long way, and Americans think that a hundred years is a long time.) But having found some, I thought I would over the next several posts share with you a few of the best or at least most interesting of what I discovered in the way of heraldry and heraldic-style devices out there in the heartland of the United States. 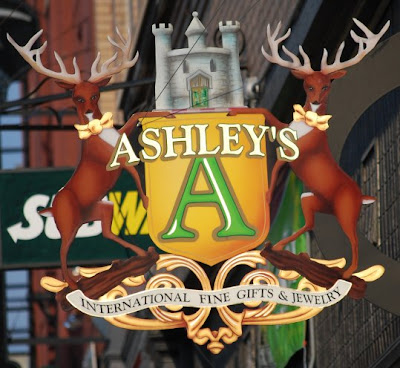 The most "complete," if you will, was what I call "an achievement of fake arms", a sign hanging over Ashley’s gift shop in the Old Market in Omaha. Parts of it are pretty classic heraldry; other parts are maybe not so much. Yet in a number of ways it comes so close. Good contrast: vert on or on the shield. A castle proper for a crest, atop a barely noticeable torse argent and gules. Two stags proper as supporters, but gorged of yellow bow ties, and standing atop a pair of logs which are then superimposed on one of the old Victorian "gas bracket"-style compartments. And, of course, the "motto" is no such thing, but merely a description of the goods carried by the store.

And yet, what an amazing thing to run across while strolling down the street of a Friday morning!
Posted by David B. Appleton at 8:30 AM