Continuing our survey of some of the heraldry and pseudo-heraldic devices to be found in downtown Omaha, Nebraska, these come from the exterior of what is now called The Omaha Building. 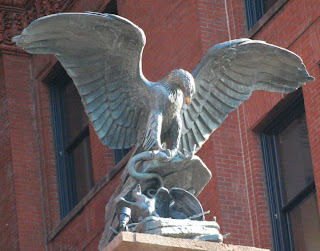 Built in 1888, probably its most noticeable feature is the statue of the eagle, snake in its claws, with its eaglets in the nest immediately below the rock on which it perches. 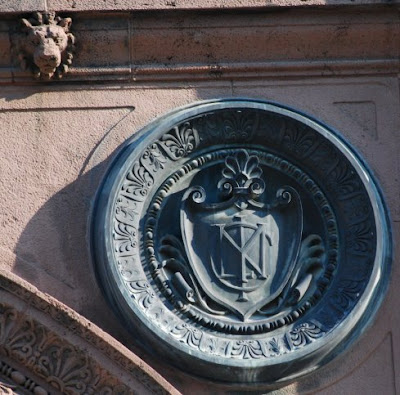 But, of course, as a herald the eagle is not what drew my eye first. Shield shapes. That’s what catches my eye. And there was, in two places on the facade, one on either side of the main entrance, these really great shields. No real heraldry, alas, and it took me a little research to figure out what the monogrammatic letters on the shield stood for. While it may be called The Omaha Building now, it was originally built for the New York Life Insurance Company. And if you take just a moment to carefully study the shield, sure enough, you can pretty easily make out N-Y-L-I-C. (There's also that lion's face above and to the left of the "arms", one of a row of such lion's heads along the length of the facade.) 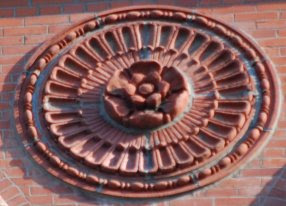 Finally, there was this really great double rose, placed directly over the main entrance to the building. (I won’t call it a Tudor rose, since it has no tinctures, and Tudor roses are always a combination in one way or another of red and white, or more specifically the red rose of Lancaster and the white rose of York.) But what a beautiful piece of carving of a classic heraldic charge.
Posted by David B. Appleton at 8:30 AM