Okay, we’ve looked at an achievement of fake arms, and at a shield that only held some monogrammatic lettering. Today we take a look at some real heraldry. 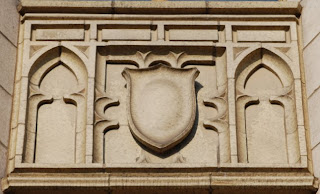 One of the buildings in downtown Omaha had some blank shields between pairs of neo-Gothic arches spaced regularly about the exterior. ("Why blank shields?", I find myself asking. But in much of the American architecture I’ve looked at, I have found far more blank shields and cartouches and oval shields than I have found with coats of arms or even faux coats of arms carved onto them. As a herald, I find this to be a shame, but I suppose it’s easier, and cheaper, to put up a blank shield than to research an appropriate coat of arms to place on it. But I digress.) 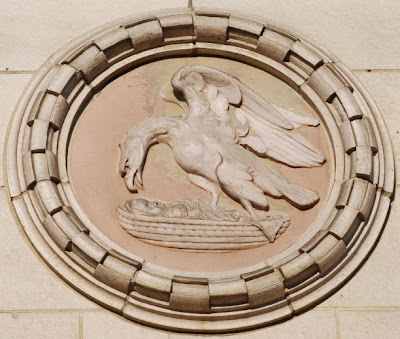 On that same building was an actual, honest-to-goodness crest! No torse, but identifiable as a crest nonetheless. It took just a few minutes of research in Fairbairn’s Crests of the Families of Great Britain and Ireland to learn that it was the crest of Stanley (Northampton) which is blazoned as: An eagle, azure preying on a child proper, swaddled in a basket gules. There are several families which bear a crest of an eagle preying upon an infant, but the Northampton family of Stanley appears to be the only one where the child is not only swaddled but is laid in a basket.
Posted by David B. Appleton at 8:30 AM