I should really learn to stop doing "that." In this case, "that" is reading the daily birthdays in the newspaper. Last Thursday, Ursula Andress, Honeychile Rider in the movie Dr. No, with that iconic scene of her walking up out of the ocean in that bikini, turned 73. Well, crap! There goes another adolescent fantasy, with the added "attraction" of making me feel a heckuva lot older, too. 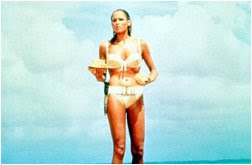 But that particular news item, coupled with the release on DVD on Tuesday of the most recent 007 movie, Quantum of Solace, got me thinking about "Bond. James Bond." And his literary connection to heraldry via a coat of arms, complete with motto (the title of today’s blog entry, which was translated from Latin into English and became the title of the 1999 James Bond movie, The World Is Not Enough).

In On Her Majesty’s Secret Service, James Bond goes undercover as Sir Hilary Bray, a friend to and emissary of Sable Basilisk Pursuivant of the College of Arms in London. But before his meeting the Sable Basilisk at the College of Arms on Queen Victoria Street, he gets cornered by the Officer in Waiting, Griffon Or Pursuivant, who seems more than a bit nonplussed when Bond claims no interest in a possible relation to Sir Thomas Bond, Baronet, of Peckham, Surrey, who was Comptroller of the household of the then-Queen Mother, Henrietta Maria, and for whom Bond Street in London is named.

"The coat of arms, for instance. Surely that must concern you, be at least of profound interest to your family, to your own children? Yes, here we are. ‘Argent on a chevron sable three bezants.’ ... A bezant is a golden ball, as I am sure you know. Three balls. ... And this charming motto of the line, ‘The World is not Enough.’ You do not wish to have the right to it?" "It is an excellent motto which I shall certainly adopt," said Bond curtly. 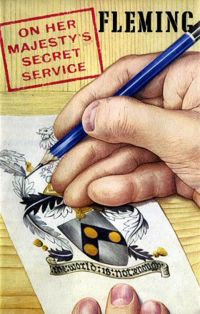 The arms can, in fact, be found in Burke’s General Armory:

The motto can be found in Burke under Bond, Isle of Purbeck, co. Dorset. Non sufficit orbis.

So think about all this the next time you catch a James Bond movie.
Posted by David B. Appleton at 8:43 PM