And a Happy St. Patrick’s Day to You! 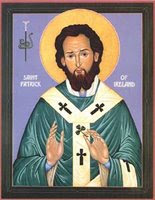 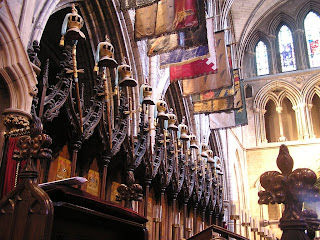 And, of course, the stalls of the knights of the Order remain in St. Patrick’s Cathedral (in Gaelic, Árd Eagláis Naomh Pádraig) in Dublin, with the stall plates with their arms affixed to their places, surmounted by their helms and crests, with the banners of their arms above. (Banners of the knights of the Order are also to be found on display in one of the halls at Dublin Castle.) So while the Order of St. Patrick itself may rightly be considered a thing of the past, its heraldry remains to be seen, and hopefully enjoyed, by visitors today. And hopefully also by you, on this St. Patrick’s Day.
Posted by David B. Appleton at 8:59 AM