That is to say, the heraldry is bad, not necessarily that the movie is.

In fact, this movie is still kind of a classic, and can be found easily available on DVD. (Unlike The Black Shield of Falworth, which I’ve only found through one specialty shop on-line.) In this case, the movie is that old Errol Flynn vehicle, The Adventures of Robin Hood. 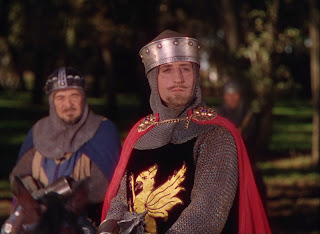 And, in fact, some of the heraldry in it is actually pretty decent. Basil Rathbone plays Sir Guy of Gisbourne, whose coat of arms is not only better heraldry than that of Tony Curtis in The Black Shield of Falworth, but which seems to show that they might perhaps be (under the rules of heraldic cadency) different branches of the same family. Sir Guy’s arms are Sable a griffin segreant or, while the Falworth arms are Sable a griffin segreant gules. It’s just a tincture change to the sole charge on the field, an often-applied method of differencing in the earlier years of heraldry.

Ah, but now we come to the "bad heraldry" portion of this movie. Check out the costume designer’s drawing below for a couple of surcoats with their attendant "coats of arms". (Editorial comment: "Eww.") The tinctures are muddied. The shields don’t match the surcoats. (And it was originally from knights wearing their armorial devices on their surcoats that we derive the term "coat of arms"!) The charges (are they ragged staffs, or some kind of plants? It’s a little hard to say for sure) on the surcoat on the left are difficult to identify. And the eagle on the shield to the right looks like it’s been to Germany, where they sometimes do such things on shields. But not in England, and most certainly not in Plantagenet England. 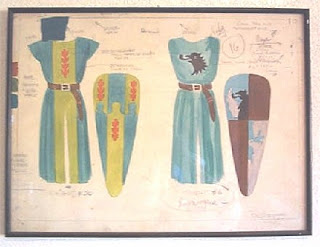 Maybe someday I should offer to do the heraldry for the next costume drama Hollywood produces to be set in the Middle Ages. Or not. I mean, I care about it. They, apparently, frequently pretty much don’t.