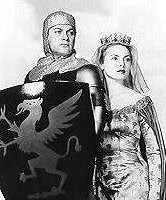 Now, admittedly, most people will remember this particular movie (if they remember it at all) not because of the bad heraldry in it, but for a line that they "recall" the star says in it. Unfortunately, they are wrong. I’ve had people tell me that they were "certain" that this particular line of dialogue is in this movie. But it’s not. Nowhere in The Black Shield of Falworth will you find Tony Curtis saying the line, "Yondah lies the castle of my fadduh." Like Sherlock Holmes’ "Elementary, my dear Watson", and Humphrey Bogart's "Play it again, Sam", it was never said! Not once in any of the books by Arthur Conan Doyle does Holmes ever say, "Elementary, my dear Watson." Nowhere in Casablanca does Rick of Rick's Café Americaine ever say, "Play it again, Sam." And nowhere in The Black Shield of Falworth (or in any other movie) does Tony Curtis ever say, "Yondah lies the castle of my fadduh." The closest he comes to it is in a different movie entirely, Son of Ali Baba, where the character he plays, Kashma Baba, says "This is my father's palace, and yonder lies the Valley of the Sun." And yet, Sherlock Holmes, Humphrey Bogarts’s Rick Blaine, and Tony Curtis’ Myles Falworth are all commonly "known" to have said their respective lines. 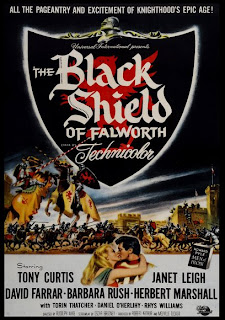 But I digress. The Black Shield of Falworth is my favorite bad heraldry movie simply because of the prominence given to the bad heraldry. The black shield borne by the Falworth family would be blazoned as Sable a griffin segreant gules. (Though I note from the movie poster (right) that on the barding for his horse it is Or a griffin segreant gules.) It’s a coat of arms that, to the best of my ability to discover, would never have existed in England. Germany, maybe. You find some low-contrast red charges on black fields occasionally in German armory. But in England? I don’t think so. And yet, there it is, larger than life, forming the most obvious element on the movie poster, and even giving the movie its title.
Proving, I guess, that you don’t have to know heraldry to do heraldry in the movies. About which, perhaps, more next time.
Posted by David B. Appleton at 8:35 AM