Okay, I’ve ragged enough about movies with bad heraldry in them for the nonce. Now it’s time to discuss one or two movies that I think did right by their heraldry.
The first is a movie that not only reintroduced Shakespeare to a whole new generation, but propelled its director/leading actor onto the international movie scene as one of the foremost cinematic interpreters of Shakespeare’s works. I refer, of course, to Kenneth Branagh’s Henry V. 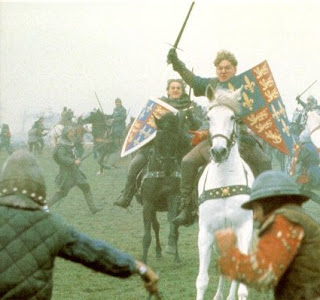 This is a movie that really did the heraldry right! (For the most part.) From Henry V’s heraldic jupon through the arms worn by Henry’s younger brothers (you can actually tell who is who just from their differenced arms. For example, the one in the picture above, riding just behind Henry, is Humphrey, Duke of Gloucester, who bore Quarterly France and England, a bordure argent) to the arms not only of the King of France (especially as worn by his herald, Mountjoy), but those of the Dauphin (though here I believe the tincture of the dolphins is incorrect) and of the French Constable (even though these appear only effectively untinctured in the movie, on his breastplate), the heraldry was done very well. 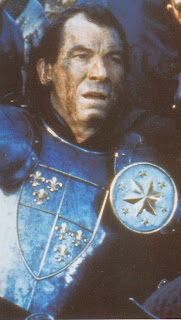 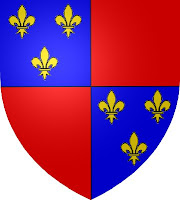 The d’Albret arms were originally Gules plain, but these arms were augmented in 1389 by King Charles VI by quartering with the French Royal arms (Azure three fleurs-de-lys or), the augmentation (as being more honorable) taking the first and fourth quarters and the historical d’Albret arms taking the second and third quarters (Quarterly France and gules). These arms appear prominently in the film on the Constable’s breastplate. I don’t know if the Constable bore his arms on his breastplate at the Battle of Agincourt on October 25, 1415. If he did, they were damaged during the battle, as he died there from a bodkin arrow through the breastplate.
As an aside, I note that in the play, in very longstanding and English fashion, many of the French names are Anglicized. The Dauphin is spoken of as "the Dolphin", Louis is pronounced (and spelled) Lewis, and the "high constable of France", Charles d’Albret, is given as Charles (with the English pronunciation rather than the French) Delabreth. However, to quote "The Fool of Arms" in the book Motley Heraldry,
"... with the herald’s wonted tact,
I draw no moral from this fact."
Posted by David B. Appleton at 9:48 AM