Three Coats of Arms by a Famous Sculptor


There are three coats of arms on the façade of the Boston Public Central Library at Copley Square. 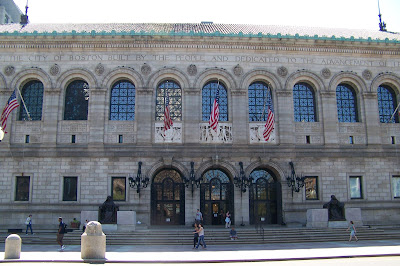 Done in relief, they are especially notable for having been done by American sculptor of French-Irish ancestry Augustus Saint-Gaudens who, as Wikipedia informs us, was "a sculptor of the Beaux-Arts generation who embodied the ideals of the American Renaissance."
We have already seen one of the three coats of arms over the triple main doorway of the Library, the arms of the Commonwealth of Massachusetts, in one of our recent posts (April 25):
The Massachusetts arms are the shield on the left in the image of the Library's façade, above.
Today, we' re going to look at the other two shields.
The one on the right is the arms of the City of Boston, Massachusetts, where the Library is situated. The shield contains a depiction of the buildings and shorefront of the City of Boston with several two-masted sailing ships in the harbor in front.

The inscription Bostonia Condita AD 1630 is simply, "Boston founded 1630", and the whole (depiction of the city and the inscription) are taken from the city's seal.

The scroll above the shield bears the legend Sicut Patribus Sit Deus Nobis (“God be with us as he was with our fathers”), and the scroll around the bottom of the shield reads Civitatis Regimine Donata AD 1822 ("Donated by the State Government 1822").

The final shield, in pride of place in the center, is of the seal of the library, depicting two nude boys as supporters, holding torches and supporting between them a shield with an open book between in chief and in base the Roman numerals for 1852 and 1878. 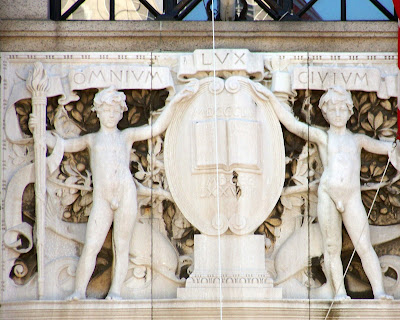 Those numerals are the date of the founding of the library in 1852 and incorporation of the Board of Trustees in 1878. The motto above the shield is Omnium Lux Civium, "The Light of All the People."
Not especially good heraldry, really, but you have to admire the highly-detailed work of this world-famous sculptor, as well as the ideals stated in the various mottoes accompanying them.
Plus, not only is is heraldry, but public art, on display for all to see and enjoy!
Posted by David B. Appleton at 2:00 AM