Absence of Evidence Is Sometimes Evidence of Absence


Well, we very recently returned from a week-long trip to Massachusetts from our home in Texas. We'd been looking forward to this trip for a long time -- we had to cancel it in the fall of 2019 just as Covid was ramping up. It was very disappointing, because we had already made all of the reservations and flight arrangements, etc. But what can you do? In the interests of our (aging) health, we chose to cancel rather than take the chance.

But this year, we finally got back out there! (Not completely without trepidation, but still, out there.)

And it was well worth it. We drove all over eastern Massachusetts and up into southeastern New Hampshire, visiting, as my wife put it, "relatives, both living and dead."
Visited lots of graveyards: my father's parents (Bellingham and Marblehead); my mother's parents (Milford and Upton), my father's maternal grandparents (Milford), my father's maternal grandmother's parents (also Milford), two sets of great-great-great grandparents (Worcester, Hopkinton), my Civil War ancestor, 3rd great grandfather buried with his wife, my 3rd great grandmother (Nashua, NH), my 2nd great grandfather and his second wife (also Nashua, NH), and even a pair of 8th great grandparents (Orleans, MA). Not to mention Proctor's Ledge in Salem (where my 10th great grandmother and 1st cousin 10 times removed were hanged in 1692, having been tried and convicted of witchcraft), and as an unplanned bonus, the burying ground where another 10th great grandmother is buried, as well as a chance to interact with the person portraying my 11th great uncle, Edward Winslow, at Plimouth/Patuxet (photo below). And to walk once again aboard the Mayflower II, which I last saw in 1963. (Why, yes, it was a pretty full week, which also included nice visits with my aunt and my youngest son.) 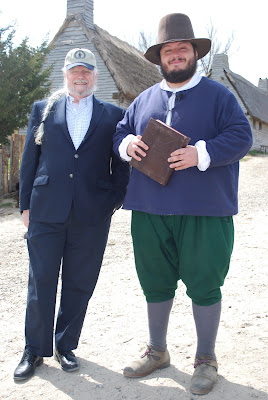 We even stopped by the grave of the man who invented the pink plastic lawn flamingo in Berlin, MA. 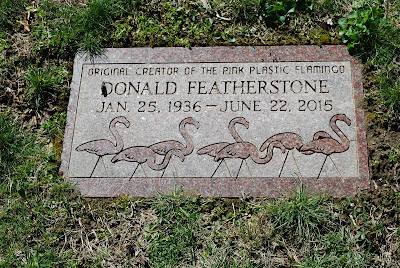 (Yes, someone has stood a quarter on its edge in the upright of the "D" in his first name.)
But in all that traveling around, what didn't I see much of?
That's right -- coats of arms.
Here's an example of a heraldry-adjacent logo which I ran across in our travels: 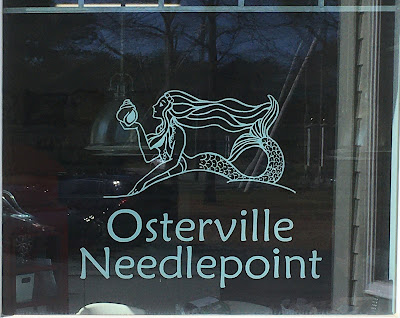 So, yeah, not heraldry. Still, it's a mermaid, and you can find mermaids in heraldry. Thus, "heraldry-adjacent".
Next time, a couple of still-not-heraldry shields.
Posted by David B. Appleton at 2:00 AM