I spent a number of my growing up years in the State of Michigan, a state which consists of two (very large) peninsulas.

The state motto of Michigan is (in Latin): Si quaeris peninsulam amoenam circumspice. This translates into English as "If you seek a pleasant peninsula, look about you".

I was reminded of this motto recently in preparation for a presentation I gave to a local genealogical society entitled "In Their Footsteps: The Genealogical Tourist", which is all about visiting the places where your ancestors once lived and containing some practical advice on how to do that and what you might find once you are there.
As a part of that presentation, I talk about being flexible, being able to deal with both obstacles and opportunities that might arise on such a trip.
But I also wanted to make another point, one that could be summed up in a single Latin word: Circumspice; Look about you.
Because, as I often say, you just never know what you might find.
The example I give of this is from the time in 2014 when we spent a week in London, visiting both some of the usual touristy things (e.g., Westminster Cathedral, the Houses of Parliament, Temple Church) and ancestor-related things (St. Margaret's Chapel, where a few ancestors were baptized, married, and/or buried).
But we also spent some time just walking about and looking about us.
It was getting on towards lunchtime, and we were starting to feel hungry by the time we walked across the Thames and came to the former church of St. Mary-at-Lambeth, just outside the gatehouse to Lambeth Palace, the London residence of the Archbishop of Canterbury. 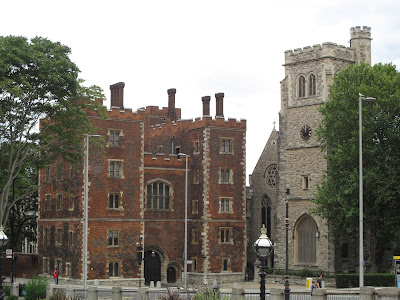 The church of St. Mary-at-Lambeth (above, on the right) is now The Garden Museum, founded in 1977 to preserve the church in which, a sign there told us, John Tradescant, "the Shakespeare of gardening", was buried in 1638. The Museum includes, as a chalkboard outside the building noted, a small café. Excellent! We went in for lunch.
Following lunch, we went out into the garden/old burying ground attached to the Museum/church. Where we saw the very elaborately-carved tomb of John Tradescant. Which even had a coat of arms on it! 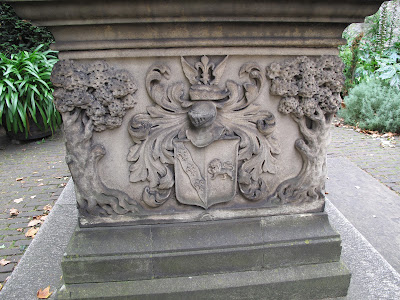 But, of course, it was an old burying ground, and there were other burials and tombs there, one of which caught my eye not only because it was armorial (Azure a griffin segreant or between three crescents argent (Bligh), impaling Or a bend gules a chief indented azure (Betham)),
but because of the unusual urn and finial atop it. 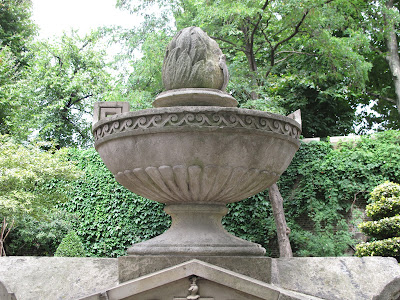 I mean, that's not a flame issuant from the urn, is it?
But it was when I stopped to read the inscriptions on the ends and sides of the tomb that I found myself face-on with a real piece of history. 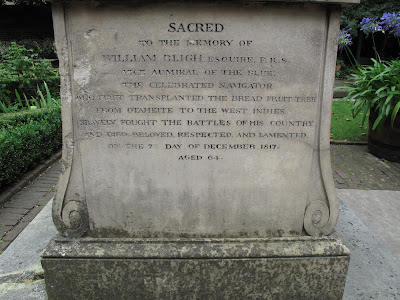 Feel free to click on the image above to see a larger, more readable copy.
This is the tomb of William Bligh, Vice Admiral of the Blue (as well as that of his wife, Elizabeth Betham, two of their sons, and an infant grandson).
I thought, "No! It can't be! We couldn't have just stumbled upon the final resting place of "Captain" Bligh of HMS Bounty."* But it says quite clearly, "The celebrated navigator who first transplanted the bread fruit tree [well, that explains the finial! It's not a flame, it's a breadfruit] from Otaheite [Tahiti] to the West Indies."
I had read the trilogy Mutiny on the Bounty, Men Against the Sea, and Pitcairn's Island as a boy growing up in Michigan, and seen the 1962 film starring Marlon Brando as Mr. Christian and Trevor Howard as Captain Bligh. And here I was, face-to-face, as it were, with the central figure of that history, those books, and that movie. Wow!
And all because we had, without foreknowledge and without planning, stopped at a Museum café for lunch, and then afterwards decided to "look about us".
So I say to you, as I have said to others before and will to still more others in the future, wherever you go, be sure to take some time and Circumspice. You might find a lot more than "just" heraldry; you might actually run into one of the heroes or villains whose story you learned in your youth.
* To be entirely accurate, at the time of the mutiny, he was Commanding Lieutenant of HM Armed Vessel Bounty.
Posted by David B. Appleton at 2:00 AM