There is a gate (one of several) in the wall surrounding the Harvard University campus in Cambridge, Massachusetts. This particular gate is called the Johnston Gate, named for Samuel Johnston who provided the funds for its construction. It was completed in 1889, and cost some $10,000, a gift of Samuel Johnston (Harvard College class of 1855).
Here is the ironwork of the arch of the gate: 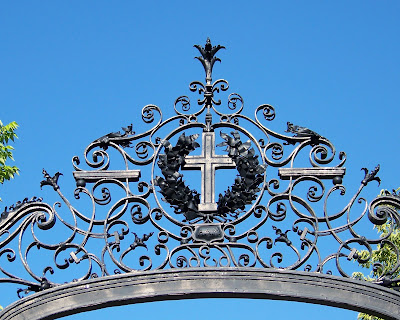 One one of the two pillars of the gate, we find this carving and inscription: 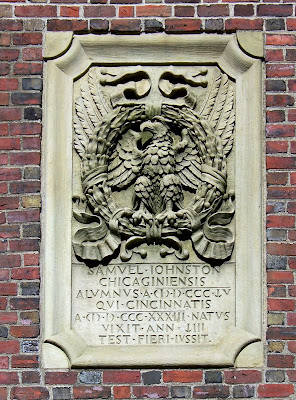 The Latin may be roughly translated as: Samuel Johnston of Chicago · Graduate in the year 1855 · Who was born in Cincinnati in the year 1833 · Lived 53 years · By his will he ordered this."

The eagle and laurel wreath may almost be seen as heraldic, and could be used as a (bit complex, I will admit) crest.

But the other pillar contains the arms of the City of Cambridge, Massachusetts: 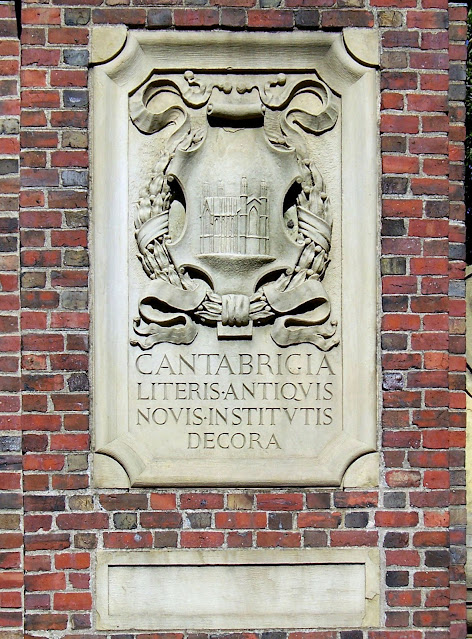 Adopted as a seal in 1846, it contains an image of the Gothic Revival style building, Gore Hall, the former library building at Harvard College. The Latin motto (which is often included around the city seal) underneath the Latin of the city's name, reads: "Literis Antiquis Novis Institutis Decora." It can be translated as: "Distinguished for Classical Learning and New Institutions."

The current city seal has added to Gore Hall an image of the Washington Elm, the Cambridge tree made famous by the popular legend of George Washington taking command of the Continental Army under it during the American Revolution, as found here on a building in Cambridge: 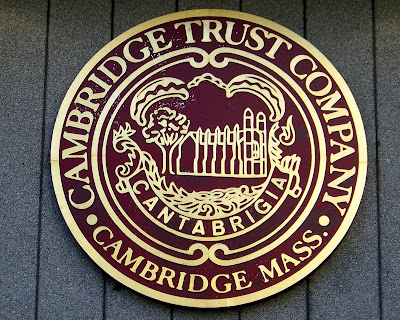 Maybe not the best of heraldry, but it is nonetheless heraldry!
Posted by David B. Appleton at 2:00 AM