Abigail Adams, née Smith, wife of founding father and second President of the United States John Adams, often wrote letters to her husband while he was away from the family farm tending to the important business of revolution and establishing a new nation state, offering him her views and political advice. In her letters, she also penned her thoughts on how women should have the same rights as men, urging Adams and the Continental Congress to “remember the ladies.”
In the field of heraldry, we often find ourselves focusing on men, because in most countries, it is only the sons of armigers who inherit a family's coat of arms.
And yet, there are times when memorializing the female members of an extended family is entirely appropriate, and (in my opinion) ought to be done more often.
An example is today's memorial from St. Bavo's Cathedral in Ghent.
The memorial is to Maximilien II van de Woestyne de Becelaere, Vicar General of the Chapter of St. Bavo’s Cathedral and lord of Caridon. 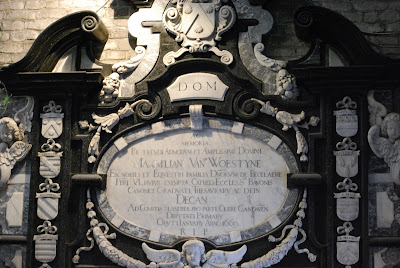 We'll get to the van de Woestyne arms at the top of the memorial in a moment.
Maximilian II was the son of Maximilian van de Woestyne de Becelaere (d. 1669) and Anne of Huerne. Flanking the central panel of the memorial are eight shields: the paternal arms of van de Woestyne on the upper left (Sable a chevron between three escallops argent), and the arms of Maximilian II's mother's family, Huerne, on the upper right (Argent a fess and in chief three merlettes [or martlets] sable).
The other six shields would be those of grandfathers and grandmothers and great-grandfathers and great-grandmothers on both sides of his family. Here's a close-up of the four on the left (with the surname carved on a ribbon above each shield): 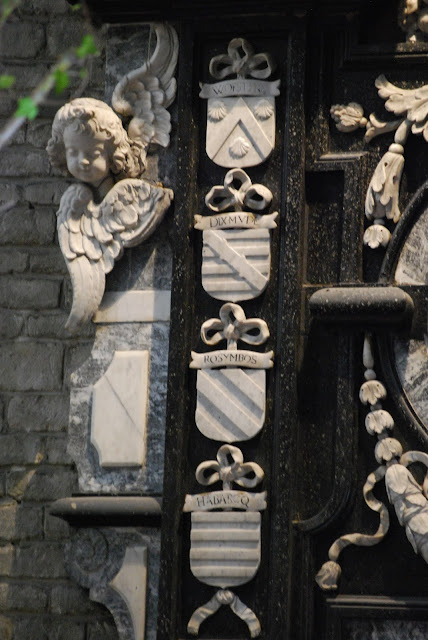 Of course, at the top in the most prominent position are his (Maximilien II van de Woestyne de Becelaere) arms (Sable a chevron between three escallops argent). 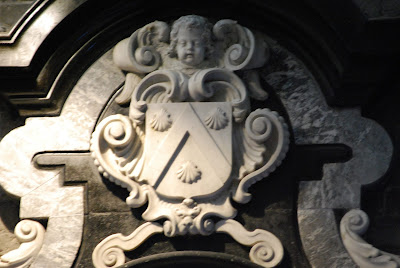 So, yeah, it's a memorial to a man. But it's also an armorial memorial to his antecedents, both male and female, thus helping us all, in the words of Abigail Adams, to "remember the ladies."
Posted by David B. Appleton at 2:00 AM