On the Way to, and Inside of, the Cathedral in Ghent


Following all of the other buildings and monuments and most especially coats of arms we saw in our one-day excursion to Ghent, Belgium, we made our way towards the Cathedral. So first, a little background on the Cathedral itself:

Saint Bavo’s Cathedral (in Dutch, Sint Baafskathedraal) is an 89-meter (292 feet) tall Catholic cathedral in the heart of Ghent. It is the seat of the Diocese of Ghent, is named for Saint Bavo of Ghent, and contains the well-known Ghent Altarpiece by Hubert and Jan van Eyck. In 1539, as a result of the rebellion against Charles V, who was baptized in the church, the old Abbey of St. Bavo was dissolved. Its abbot and monks went on to become canons in a Chapter that was attached to what then became the Church of Saint Bavo. When the Diocese of Ghent was founded in 1559, the church became its cathedral. Construction was considered complete on June 7, 1569.

The medieval (and very rich) Abbey of St. Bavo in Ghent was secularized in the middle of the 16th century, being turned into a collegiate chapter. A generation later the bishopric of Ghent was established with the office of Provost of the St. Bavo Chapter being merged with that of Bishop (to provide it with a bigger income). So the bishopric took the arms of the medieval abbey: Azure a lion rampant barry of six argent and gules crowned armed and langued or.
We had not even made it all the way to the Cathedral before we ran across some heraldry on the corner of a building along the way that was related to it: 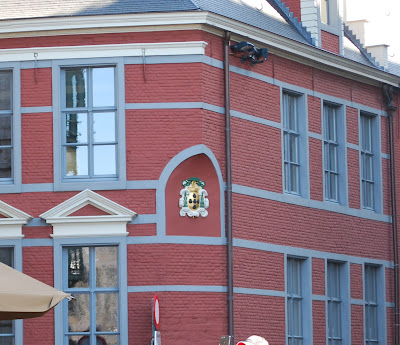 And here are these arms in greater detail: 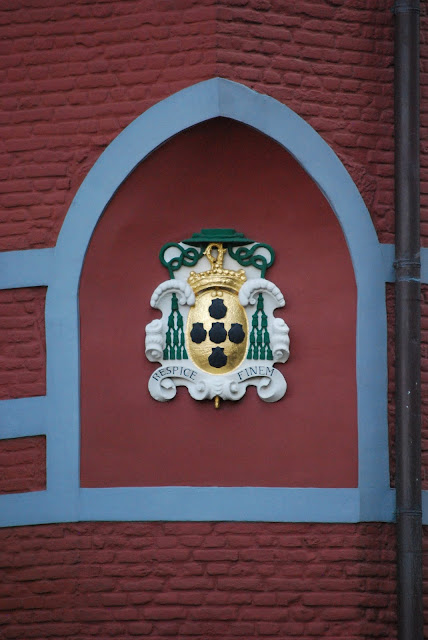 These arms, clearly marked by the galero as belonging to a bishop, are blazoned: Or five escallops in cross sable. Motto: Respice finem (Look [to the] end).
Later, inside the Cathedral, I found another copy of these arms on on the portrait of Maximilian Antoon van der Noot, Bishop of Ghent 1743-1770: 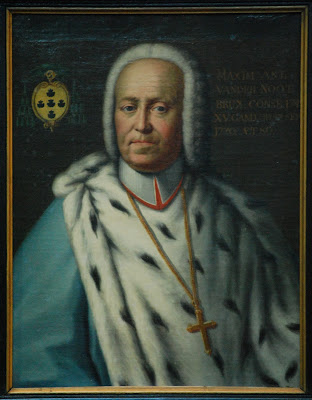 That said, it is possible that the arms out on the street are those of Philippe Erard van der Noot, Bishop of Ghent 1695-1730, rather than Maximilian. However, given that they belong to the same family, it really doesn't matter very much which Bishop specifically is being commemorated; they were both van der Noots, both Bishops of Ghent, and both bore the same undifferenced arms.
Elsewhere in the Cathedral, I also ran across this version of the van der Noot arms (though with errors in the depiction), quartered with those of the Bishop of St. Bavo (see the background information above for the why's and wherefore's). 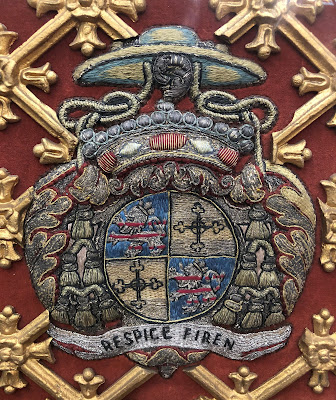 Found on a reliquary, these arms are for either Bishop Philippe Erard van der Noot or Bishop Maximilian Antoon van der Noot. The are blazoned: Quarterly: 1 and 4, Azure a lion rampant barry of six argent and gules crowned or (Bishop of St. Bavo); 2 and 3, Or a Celtic cross bottony sable. (Quarters two and three should be, of course, Or five escallops in cross sable. I could find no Bishops bearing arms with this cross. I suspect that the needleworker was copying from a very roughly drawn sketch.) Motto: Respice firen (which should be Respice finem (Look [to the] end).
With or without errors, it was gratifying to see these various versions of this family's coat of arms both inside and outside of the Cathedral.
Posted by David B. Appleton at 2:00 AM