As fun as it is to see the many ways that a city uses its own, regional, and national coats of arms, it is even more exciting to me to run across "foreign" heraldry; the display of arms (or flags) of other nations.

This is every bit as true on our trip last year to Antwerp, where we ran across the following arms and flags:

First found were two flags decorating Tropicos, "the one and only Mexican-Brazilian restaurant in the world." On the left is the flag of Brazil; on the right, the flag of Mexico, which contains the coat of arms of Mexico in the center: 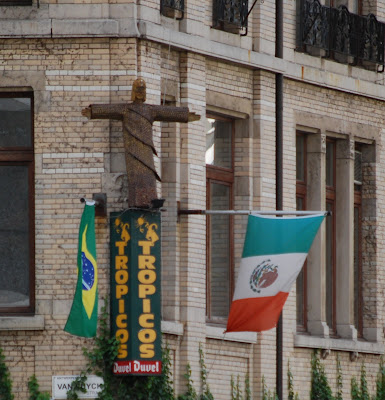 Here, on the (covered for renovation and restoration) facade of the City Hall, are the arms of el Rey Felipe el segundo, the arms of King Philip II of Spain,* encircled with the collar of the Order of the Golden Fleece. As arms of dominion, we can see León and Castile in the first (upper left) quarter, with Aragon and the Two Sicilies next to them, and Leuven and other Burgundian quarterings in the lower part of the shield, all stemming from the time that Spain ruled much of the Low Countries. 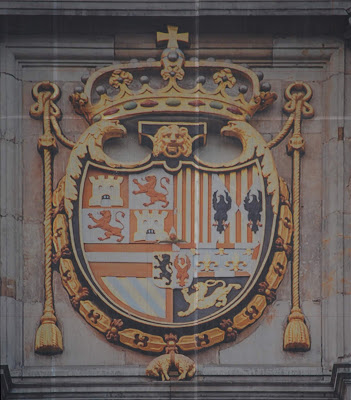 And then, in the course of our wanderings about the city, there was the flag of Portugal, with that nation's coat of arms placed prominently upon it: 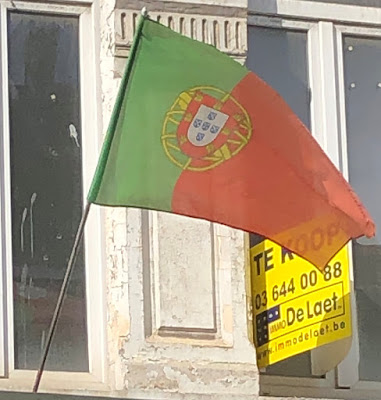 And finally, one that is not the flag of a nation, but a business logo made by combining portions of the flags of Sweden, Finland, and Norway:

All in all, some surprising, and interesting, heraldry to be found in the streets of Antwerp, Belgium.


* Yes, the same Philip II who was the husband of "Bloody" Queen Mary (Tudor), and who later sent the Armada on its ill-fated attempt to invade and conquer England.