Arms of the Margraviate of Antwerp


You may have noticed, in the first picture in the last post, what appears to be another variant of the arms of the city of Antwerp; one with a charged chief.

You would not be wrong, but you wouldn't be entirely correct, either.

There were, in the years between 874 and 1190, twelve Margraves of Antwerp. In 1106, the Margraviate was united with the Duchy of Lower Lorraine. The Duchy was abolished in 1190, and its titles (but not its lands) were given to the Duke of Brabant.

Anyway, as the Margraviate of Antwerp was created under the Holy Roman Emperor, its coat of arms consists of the arms of the city of Antwerp (Gules a four-walled triple-towered castle and in chief two hands, the dexter bendwise and the sinister bendwise sinister, all argent), with the upper half (or sometimes, just a chief, Or a double-headed eagle displayed sable beaked and legged or.

This first image is from the (then-covered for renovation and restoration) facade of the town hall, with a field divided Per fess and surmounted with a coronet of a Marquis (Margrave): 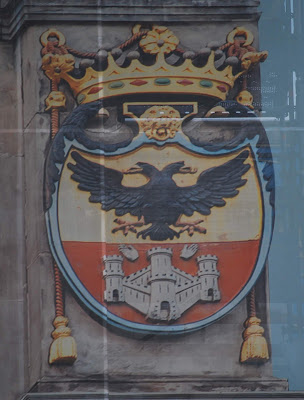 Here the arms of the Margraviate are at the peak of the window (you can click on this, or any other, image to see a larger version); the division of the field is too high for a per fess division, but is also a little low for to be a charged chief. 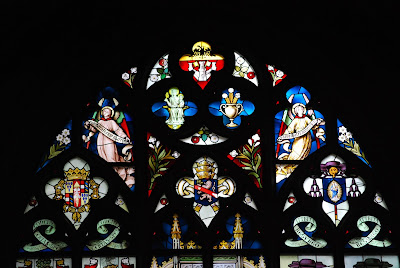 In this final image (which also has two images of the arms of the city of Antwerp), on the upper left of this window, the coat of arms of the Margraviate are more clearly a field and a charged chief. 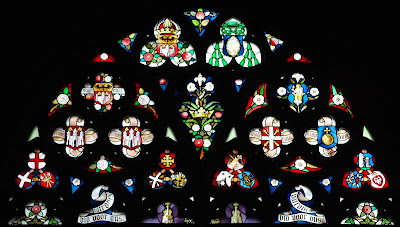 Once again, we will be revisiting the windows here to discuss some of the other heraldry contained in them.