A Pair of Foreign Arms in Heidelberg


One of the landmarks in the Old City of Heidelberg is the Hotel zum Ritter St. Georg, It is a lovely old building, built in 1592 as the residential- and business Haus zum Ritter St. Georg, on an already existing basement on the side of the town square and facing the Heiliggeistkirche (Holy Spirit Church).

It was built by a cloth merchant Charles Bélier (†1618 in Heidelberg), a Huguenot from Tournai, in what was then France and is now Belgium. Bélier left religiously intolerant France with his family and was welcomed in Heidelberg by the elector Friedrich III.

Prominently placed on the facade of the (now) Hotel zum Ritter is a pair of coats of arms. 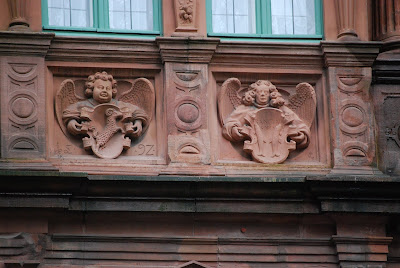 I have been unable to find blazons for these two coats, and so am unable to give you the tinctures; however --

The coat on the left-hand is the canting arms of Charles Bélier, a ram rampant (ram in French is bélier). The coat to the right (sinister) are those of his wife, Francina Soriau, and contains two fish haurient addorsed. Her name appears on the shield behind the fish.

Each shield is supported by a single angel, and M. Bélier's arms are flanked with the date of the construction of the house, 1592.