A Final Coat of Arms in the Holy Spirit Church in Heidelberg, Germany


We now come to the end of our look at some of the heraldry that can be found in the Heiliggeistkirche (Holy Spirit Church, where my great-great-grandparents first met, one from each side of the wall that divided the church's interior, separating the Catholics - in this case, my great-great-grandfather - from the Protestants - my great-great-grandmother) and other coats of arms in and around the city of Heidelberg, Germany.

This is not to say that I don't have more pictures of coats of arms from there, but they will have to wait until I have had the time to identify them before I post them here.

In any event, our last coat of arms for this time around is the stained glass window in the Holy Spirit Church of the arms of  Conrad Lud[wig] Ammann.

He is found listed in the address book of the city of Heidelberg (together with the districts Neuenheim, Schlierbach and Handschuhsheim as well as the neighboring parts of the municipality Rohrbach) for the year 1914, along with Heinrick Bohrmann, Rob. P. Dittler, City Councilor Schmidt, and Georg Busch, as members of the Supervisory Board for the city. 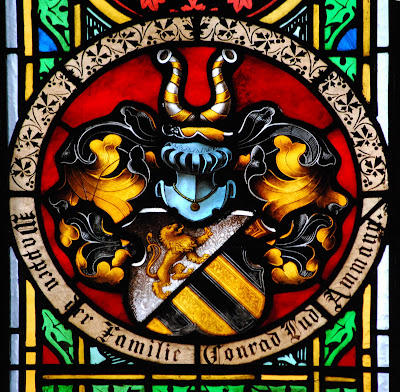 My guess (because the orientation of the line of division and the lion is so generally rare), and because the arms do not appear in Rietstap's Armorial Général to either confirm or deny, is that the arms are facing to sinister in respect of the altar of the Church, so I would blazon them: Per bend argent and or, in chief a lion passant bendwise or and in base three bendlets sinister sable. (Or, perhaps, Per bend argent and bendy sinister of seven or and sable, on the line of division a lion passant or.)

If I am wrong in my supposition, then the arms could be blazoned: Per bend sinister argent and bendy of seven or and sable, on the line of division a lion passant to sinister or.

Either way, it's a lovely coat of arms, even if it does annoy strict proponents of the heraldic Rule of Tincture ("Color shall not be placed upon color, nor metal upon metal"; here, the golden lion on the argent portion of the field).