The Heraldry in the Dome of the Trades Hall, Glasgow, Scotland


The XXXII International Congress of Genealogical and Heraldic Sciences was held last August in the Trades Hall in Glasgow, Scotland.

It's a beautiful building in so many different ways, having been designed in 1791. And one of its prominent features is the dome in one of the main rooms, underneath the one that you can see from the exterior of the building. 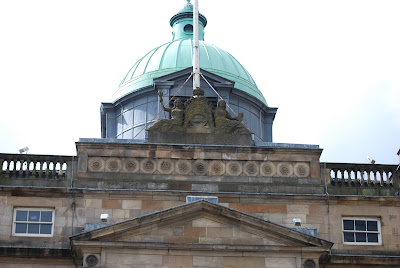 The interior of the dome, however, is truly gorgeous, and not just heraldically. (Though as you can see, it is that, too!) 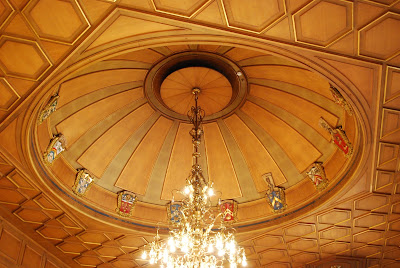 Around the lower edge of the dome are the coats of arms of the various Glasgow trades. We'll take them in order all the way round the base of the dome.

Here, the arms of the Skinners, the Bakers, and the Weavers (each of the leopard's faces is holding a weaver's shuttle in its mouth): 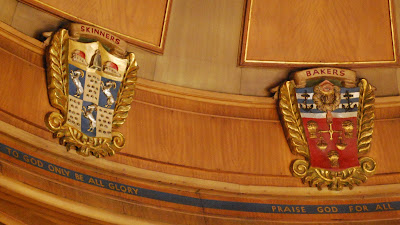 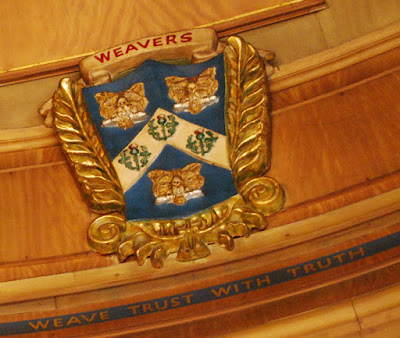 And then the arms of the Gardeners (with Adam and Eve on either side of the tree, with gardening implements on the chief) and the Barbers (with the tools of their trade, along with a periwig):

Followed by the arms of the Fleshers and the Masons:

And then the arms of Wrights and the Coopers (as you can see, nearly every trade has some of the tools of its trade on its coat of arms):

Next, the arms of the Tailors and the Hammermen (that's one big hammer!)"

Followed by the arms of the Maltmen (just about everyone's favorite people!) and the Cordiners: 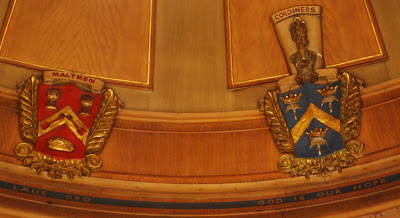 And finally, the Bonnetmakers and Dyers (you have to love the rainbow for the Dyers, don't you?): 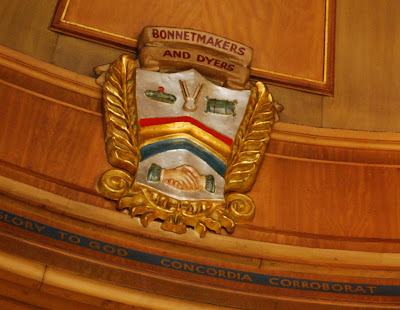 They are not always easy to read in these photographs, but each trade has its motto painted onto the edge of the dome under its coat of arms.