Having seen a memorial to their deceased children by parents in the last post, this time we visit a memorial to a parent by his children.

The text in this window states:

This window replaces an earlier
window presented by the
children of James Reddie,
Advocate, in his memory
and incorporates the coat of
arms from that window.


The coat of arms is: 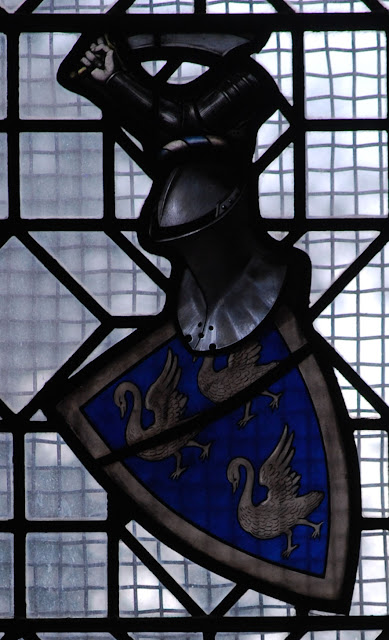 The blazon, found in Burke's General Armory, is given as Azure three swans wings addorsed within a bordure argent. The crest is blazoned there as An arm in armor couped at the shoulder embowed and resting on the elbow holding a scimitar all proper.

The James Reddie memorialized here is, I believe, James Reddie (1773-1852), legal author, born at Dysart in 1773, educated at the High School, Edinburgh - where he was contemporary with Henry (afterwards Lord) Brougham - at the university of Edinburgh, and the college of Glasgow. He passed advocate in 1797. After giving promise of high eminence in his profession, he accepted, in 1804, the offices of town clerk, assessor of the magistrates, and presiding judge in the town court of Glasgow. These posts he retained until his death on 5 April 1852. His leisure he devoted to the study of the development of law and legal theory, of which the following works were the fruit: 1. 'Inquiries, Elementary and Historical, on the Science of Law,' London, 1840; 2. 'An Historical View of the Law of Maritime Commerce,' London, 1841; 3. 'Inquiries into International Law,' London, 1842; and 4. 'Researches, Historical and Critical, in Maritime International Law,' Edinburgh, 1844.

Not the most gripping reading, I think, but I may be prejudiced by having worked for lawyers for some thirty-plus years.

Still, a man worth remembering, and it is touching to know that his children memorialized him to future generations in this way.