I'm going to finish up my survey of some of the heraldry in Glasgow Cathedral (yes, I know, there's a lot more to be seen there, but if I go through all of it, we might never get to all of the other heraldry we saw in Scotland during the week that we were there, and you'd miss out on some really cool heraldic stuff!) with these pictures from a really nice set of stained glass windows with Royal arms from the reign of King George VI.

There was some scaffolding framework erected at the time we were there, which partially blocked the view of some of these windows. It's a minor distraction, however, and in no way takes away from admiring the art and skill with which these windows were created.

We'll start with the two central (out of a total of four) windows. The first (the second window as you look from left to right) contains the arms of George VI as King of Scotland. 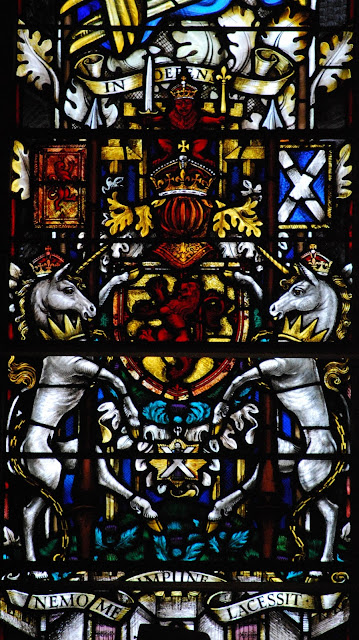 The second (the third window as you look from left to right) has the Royal arms of George VI for use in Scotland: 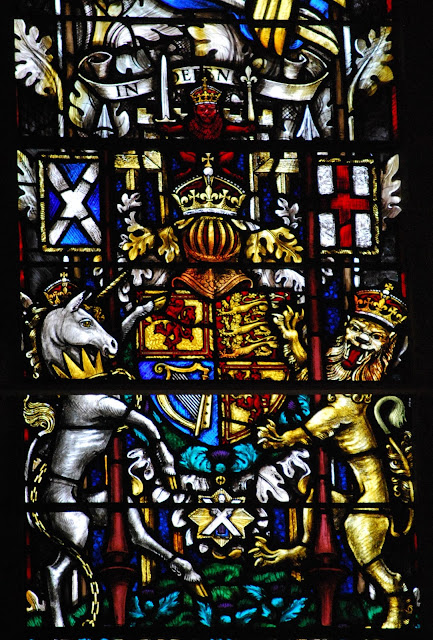 The window on the left displays the marshalled arms of George VI as used in Scotland and his wife, Queen Elizabeth (née Bowes-Lyon). (On a personal note, I really, really like the Bowes-Lyon arms! Their visual simplicity, despite being quartered arms, and colorful design make them among my favorite coats of arms anywhere.) 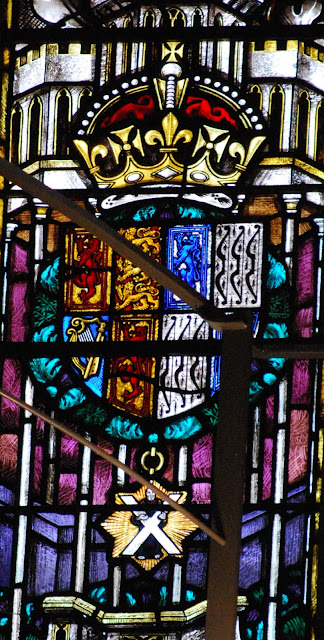 Finally, in the right-hand window, we come to the arms of Prince Phillip and his wife, the then-Princess Elizabeth (now Queen Elizabeth II*) bearing the Royal arms for use in Scotland with the label of the heir. Note the way the two shields are tied together with knots. 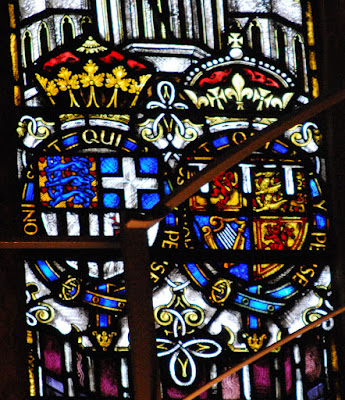 All in all, this is a very impressive set of windows, and a fitting foursome with which to end our survey of heraldry in the Cathedral at Glasgow, Scotland.

* If we were to use the older style of titles, say for example from the early 17th Century as was done during the reign of King James, I suppose it would end up as something like "Elizabeth, of England the second and of Scotland the first."