In another portion of the Trades Hall in Glasgow, there is a very large stained glass window containing the arms of Glasgow and each of the fourteen trades that make up the association. 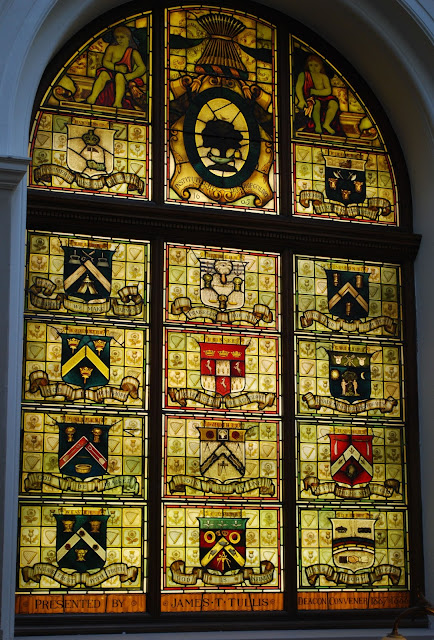 Here you can see at the top what is effectively the arms of the City of Glasgow as used by the Trades Hall; the crest is not St. Mungo, as it is in the City's arms, but a sheaf of fourteen arrows (one for each of the trades comprising the Trades Hall). Underneath the arms is the legend "Instituted by Letter of Guildry" and the date "1605."

To the left and right (dexter and sinister), respectively, of the Trades arms are the arms of the Hammermen and the Fleshers.

The remaining arms are in twelve panels consisting of four rows of three, each with a scroll beneath the shield of the motto of that trade. These panels are, from left to right, and top to bottom:

The Tailors, the Bakers, the Masons;
The Cordiners, the Skinners, the Gardiners;
The Maltmen, the Wrights, the Barbers; and
The Weavers, the Coopers, and the Dyers (elsewhere, the Bonnemakers and Dyers).

Each panel has as a background a pattern of thistles, roses, and harps (for Scotland, England, and Ireland, the constituent countries of the United Kingdom).

The window was Presented to the Trades Hall by James T. Tullish, Deacon Convener 1887-1888.