In an article published in The Scotsman two days ago (May 14, 2016), lawyer for the Airdrieonians Football Club Colin Telford gives a synopsis of the events surrounding the judgment by the Procurator Fiscal of the Lyon Court that the badge used by the AFC is "an heraldic device" and requiring them to regularlize it by a grant from the Lord Lyon King of Arms. 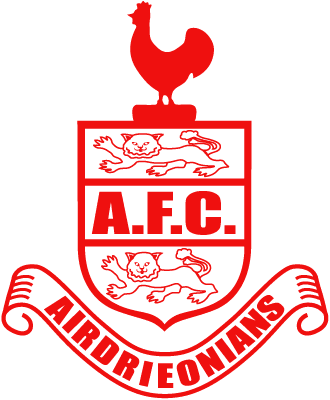 Of course, the heraldic rules in Scotland will not allow them to register it in its current form, because it has letters on it ("A F C"), and you can't have letters on your shield in Scotland.

Mr. Telford then likens this judgment to "a death sentence," which seems just a little "over the top" to me.

He goes on to note the ways that have been attempted to get around this ruling by the Lyon Court (including petitioning the Scots Parliament in Edinburgh and the British Parliament in Westminster), and having failed there, suggests one more way in which AFC (and now, Ayr United) might still try to do an "end run" (to borrow from American football terminology) around Lord Lyon, by petitioning "the Scottish Government and the Advocate General for Scotland" to obtain a review of "this ancient law."

It's a nice summary of the whole situation, but I still think he's looking at it through the wrong end of the telescope. First of all, corporations of all kinds (and the AFC is a corporation) change and "update" their logos all the time. There's no reason that the AFC couldn't do this; there is no law anywhere that they must continue to use their current badge in its current form. Second, if they feel they simply must have the letters "A F C" on their badge, then place them on something that doesn't look like heraldry; that would take it out of the jurisdiction of the Lord Lyon.

As it stands, though, they are spending a lot of money (I have no idea how much lawyers in Scotland get paid, but I know the rates here in the States are pretty high) to try to get around the law, rather than do the right thing and conform to it.  But that's just my opinion, and I may be in the minority here.

Still you can read Mr. Telford's summary of events and proposal for the future on The Scotsman's website at http://www.scotsman.com/news/colin-telford-last-chance-to-win-back-challenged-shield-1-4128205