A little more than two months now since I retired from my full-time job, and I think I'm finally starting to develop the routine that I had been thinking about for some time well before my retirement date came around.

For those of you who don't know, I had been considering retiring sometime this year anyway, though my plan was to wait until the end of the year to do it. But my mother's health had been on a bit of a roller-coaster ride for several months, and I felt the need to go out and be with her and do whatever I could to help her out. Since that was not something I could do from here (I live near Dallas, Texas; she's lived in Las Vegas, Nevada since 1963), I needed to go out there. And because I had no idea when I left how long it would take to get her situation to where all of her needs were taken care of, I didn't feel I could just take a two-week "vacation" from work and then come back. (Indeed, in the end it took us just short of a full month to do everything that was necessary for her.) So after a lot of discussion with my wife, I turned in my notice and my last day of work was March 4, 2016.

Now, I've never been worried about being bored during retirement; I've got a very long list of projects. Some are pretty prosaic: yard work, stuff around the house. Others are more involved: putting in some shelves where my wife would like some; changing out the regular door from the master bedroom to the main bathroom to a barn door-style sliding door. And some are really never-ending, like continuing to work on the family genealogy.

But the ones I've really been looking forward to involve having the time to do some serious research on heraldry projects. I've told people for some time that I was looking forward to retirement because I'd then have the time to do the research for the three (at least!) heraldry books I wanted to write. One is a relatively small project: the coats of arms along the exterior of the Santa Maria Novella church in Florence, Italy. I'd taken photographs of them all when we were there, and I want to find the names and histories of the families represented and and publish them with the pictures.

Another, bigger, book is a new edition of the colonial American Gore roll of arms. (If you are interested, I've still got some copies of the first edition available for sale at http://www.appletonstudios.com/BooksandGames.htm) What I want to do for the second edition is more research into the individuals who bore the arms and get their histories into the book, as well as to add a few more photographs that I hadn't yet had the opportunity to take before doing the first edition. 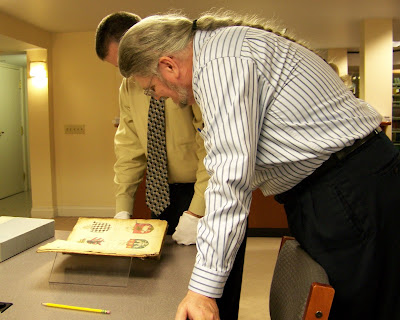 Here I am in Boston, Massachusetts back in 2008 getting to see the original Gore roll, which is held in the archives of the New England Historic Genealogical Society.

Another big project I actually started working on before I retired, and have put even more time into since then, is the creation of what I think of as a database of arms as used in the United States. Ideally, when it's done I'll be able to both sort arms from all of the sources I'm pulling from alphabetically by surname, and also to search them by the charges on the shield, thus being able to use it as an ordinary as well as an armorial. It's a bit of a job, and I'm pulling American arms from a lot of sources - Crozier's American Armory, Matthews' Complete American Armoury and Blue Book, The Heraldic Journal, the NEHGS Roll of Arms, and a whole lot of others (though not Bolton's American Armory, because there are just so many errors in it; not that the others are error-free, but sometimes you just have to draw the line somewhere!) - and I've still got a ways to go, but it's coming along and I can see the time coming when it may be a useful thing to use for researching arms as they have been used in the U.S. And although I'm really doing it to simplify my own heraldic research, once it's done I will be willing to sell or share it if someone is interested in it. I'll try to keep you apprised of the progress of this project as it gets closer to completion.

So I've been busy since my retirement, and expect to be so for the foreseeable future. And now that I'm finally getting into a routine, I also expect to be reasonably productive, not just with the household projects, but with my favorite hobby, heraldry!