What Is It With Davids and Heraldry?

Those are probably questions without any real answers, except maybe "no."  I don't know of anything about people whose given name is David which would lead them into this somewhat arcane field as an interest.

What brought on this particular musing was a recent (September 16, 2015) article on myKawartha.com about Peterborough, Ontario, Canada resident David Rumball.  I know David from his membership and participation in the Royal Heraldry Society of Canada, of which I am also a member.  However, I don't happen to live in Canada, so he gets to be a lot more active in the Society than I do.  Indeed, he just stepped down this year after a two-year tenure as the RHSC President.

I especially remember one of the annual RHSC meetings which I attended where Mr. Rumball, David Cvet (another past RHSC President) and I billed ourselves as "The Three Davids."  Ah, good times! 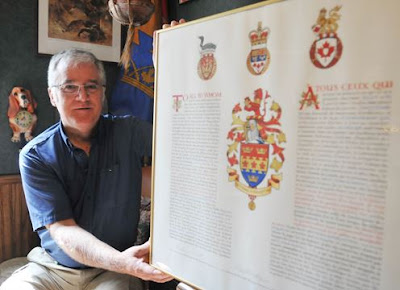 Anyway, it's a really nice article about a really great guy who just happens to share a given name and an interest in heraldry with little ol' me.  (That's a picture of him with the grant of his coat of arms from the Canadian Heraldic Authority above.)  If you'd like to know more about David Rumball, you can read the entire biographical article at http://www.mykawartha.com/news-story/5841677-peterbio-david-rumball/