The plates are engraved with the Royal arms ... 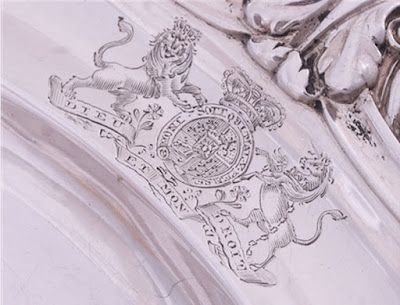 and the arms of Lord Stewart ... 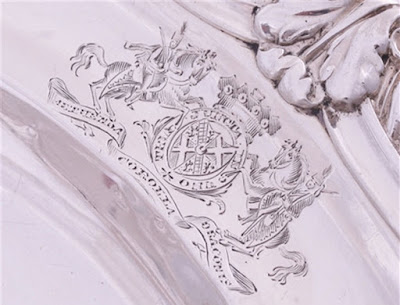 and were created on the occasion of his appointment as ambassador at Vienna on August 27, 1814.  The blazon for this Quarterly: 1st and 4th, Or a bend compony argent and azure between two lions rampant gules (Stewart); 2nd and 3rd, Azure [though the hatching appears to show gules] a saltire argent (Scotland), overall in fess point a crescent for difference.

You can learn more about both this fine pair of plates and their owner Lord Stewart (later Lord Vane; he changed his name by Royal License following his marriage to his second wife, Frances Vane-Tempest, in order to secure her inheritance), along with a formal portrait of the man known by his admirers as "Fighting Charlie" and by his detractors as the "Golden Peacock," on the myfamilysilver blog at http://www.myfamilysilver.com/blog/index.php/2015/07/ambassadorial-silver-for-the-golden-peacock-charles-stewart-lord-stewart-3rd-marquess-of-londonderry-1778-1854/#.VaOJJ_lVhBc

And, of course, if you would like to own these plates yourself (they're listed at a mere £5,500), you can find more information, and add them to your cart, at http://www.myfamilysilver.com/mp/item/21819/a-fine-pair-of-george-iii-ambassadorial-silver-plates