Symbols That Represent the U.S.A. in Heraldry

The Spring 2014 edition of The Armiger’s News, the quarterly newsletter of the American College of Heraldry, asked the question: “What symbols/elements/flora/fauna best represent the USofA...?”
The most recent edition just out earlier this week published some of the responses to that question.  Included in those responses were a number of suggested items, including: redwood tree; American bison; Liberty (head only or entire body); the Liberty Bell; a cowboy or western hat; native American war bonnet; Mississippi river boat; corn cobs; American beaver; wild turkey; bighorn sheep; and mountain lion.
It’s an interesting list, though I think that it could certainly argued that the beaver is already very much used as a Canadian symbol, and thus doesn’t really represent the United States.  And a cowboy hat (blazoned a “a stetson hat,” though I believe that “Stetson” should be capitalized, it being the brand name of the company which makes them) has already been granted nearly 23 years ago (November 5, 1991) by the Canadian Heraldic Authority in the arms of the Calgary Petroleum Club, though I can certainly see it’s being a symbol of the American West as much as or more than a symbol of something Canadian (or even the Canadian West). 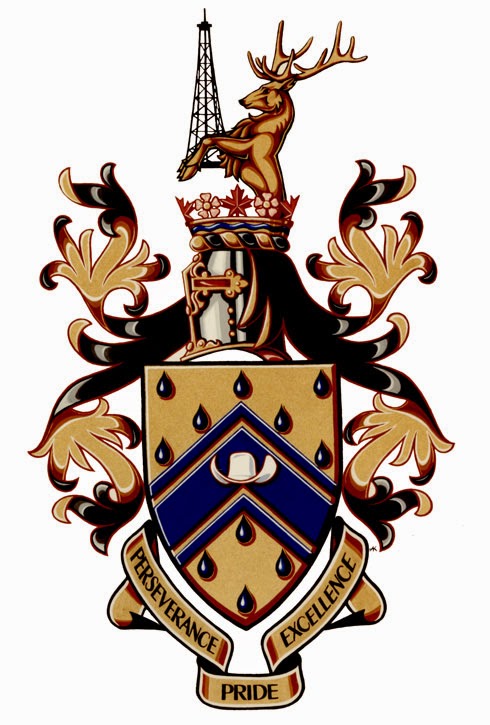 Also published in this edition of TAN was a detailed response, with examples of coats of arms, from me regarding the question put forward by the Editor.  What follows here is my (slightly edited) response to “What symbols/elements/flora/fauna best represent the USofA...?”
*     *     *
It has been my observation that the heraldic items that more or less instantly say “United States of America” to the viewer fall into three or four basic categories: (1) individual human figures (usually found as supporters) in distinctively American dress; (2) native birds and animals; (3) native plants, and (4) identifiably “American” architecture. To give specific examples of each of these (some in arms granted by an heraldic authority, most commonly the College of Arms in London, and some self-assumed):
We find both native Americans (American Indians) in their native garb and, for example, a general officer dressed in the uniform of the Confederate States of America being used as supporters. As examples of the first I give here the arms of New York City (whose sinister supporter is a native American), the arms of Hampton, Virginia (whose dexter supporter is one), and those of Kinston, North Carolina (whose sinister supporter is one). 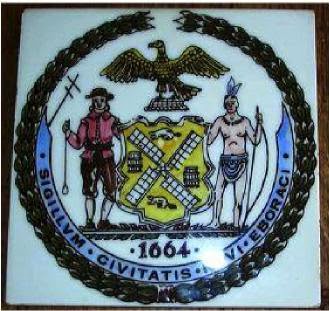 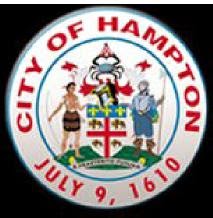 As an example of the latter, we have the arms of Loudon County, Virginia, whose sinister supporter is a Confederate officer. It seems to me that all of these pretty clearly say “United States of America” without the need for any additional explanation. 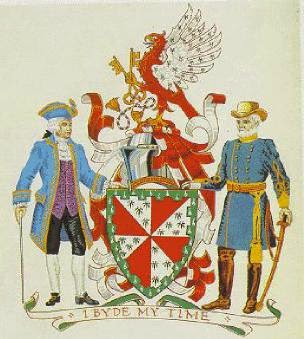 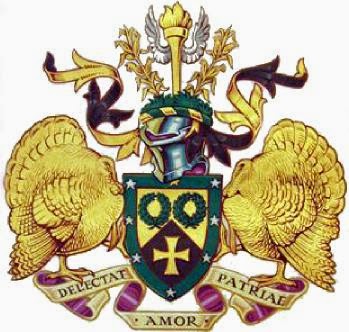 The use of native plants, though less commonly used as symbols of the United States, can be found in a number of arms: a pine tree in the arms of the State of Maine (above); an American dogwood flower in the arms of Prince George County, Virginia (above); and a branch of a magnolia tree in the canting “arms” of the Magnolia Building, now the Magnolia Hotel, in Dallas, Texas. 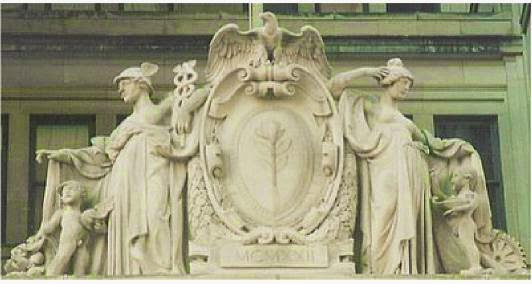 And finally, the much rarer use of identifiably “American” architecture, such as the representation in the arms of the City of Topeka, Kansas, of – well, I’m not sure whether the building in the sinister chief is some kind of a barn or is a representation of a native American wickiup, and none of my on-line research has turned up a description of it. These arms also contain in base a representation of the dome of the state capitol building in Topeka, but I am uncertain that this (or other similar capitol domes sometimes found in other states) really says “United States,” given the use of similar domes in Europe (most notably on St. Peter’s Basilica in Vatican City in Italy). 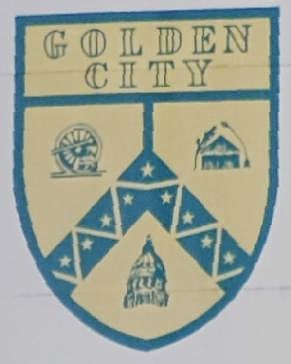