Another Bit of Heraldic Serendipity


Puttering about on the internet the other day, as I occasionally do, I ran across another sports team with a coat of arms-like logo: 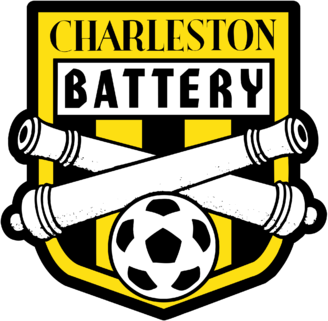 The Charleston Battery is an American professional futbol (what we call "soccer" here) team based in Charleston, South Carolina. Founded in 1993, the team plays in the third-tier USL Professional Division.

Charleston is one of the more successful minor-league soccer teams in the United States, having won the final season of the USL Second Division in 2010 and the USL Pro Championship in 2012.

The team has played its home games at the soccer-specific Blackbaud Stadium since 1999. The team's colors are yellow, black and red.

The team's logo mimics somewhat the arms of the United States, with its paly field (here, Sable two pallets Or) and chief (here, Argent charged with the word "Battery").  The crossed cannons no doubt refer to the City of Charleston as the place where the first shots of the American Civil War were fired upon Fort Sumter in Charleston harbor, and of course the soccer ball is self-explanatory.

A fun bit of heraldry, and history, to have run across while searching the web for something else entirely!