One of my favorite quotes to cite when talking to genealogists about heraldry is one from author L.G. Pine in his book Heraldry and Genealogy:

At the outset there is a curious fact in the relationship between the two subjects.  While students of Heraldry do take to Genealogy and acquire a considerable knowledge of it, those who begin as genealogists seldom if ever take any interest in Heraldry.  This is most unfortunate because the two subjects are necessarily connected.


I ran across an example of a link between heraldry and genealogy while attending last year's Federation of Genealogy Societies in Fort Wayne, Indiana, on the front of a pamphlet for The Society of Indiana Pioneers. 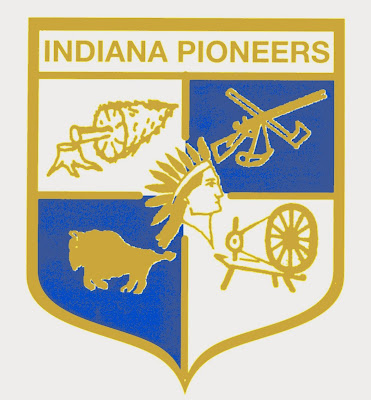 Now, no one would call this a "real" coat of arms; it's a heraldry-like logo which falls into several of the all-too-common mistakes (or at least, misunderstandings of good heraldic design) made by organizations which want a "crest" design for their logo.  For example: it's a quarterly shield with completely different charges in each quarter; it has metal upon metal, thus falling afoul of the rule of contrast; the overall charge in the center faces to sinister rather than dexter; it adds a skinny chief with the name of the group on it (also with low contrast, making it harder to read than it ought to be*); it surrounds and divides everything with gold edging.

As pleased as I am to see people trying to use heraldry and arms-like logos, I wish they'd learn just a little bit more about some of the basic rules of heraldry before creating some of their designs. Because this could have been so much better than it is.

But it is yet another example of the ability to find heraldry (or heraldry-like designs) everywhere!


*  Indeed, were the gold and white to change places, it reminds me of the time when the State of Michigan, which changed the colors of its automobile license plates every few years, one year went to white lettering on a gold ground.  There were so many complaints from law enforcement officials all across the state because they could not read the lettering except under the best of conditions - which Michigan often does not have - that the state went to a high contrast combination the very next year, having learned the hard way that the heraldic rule of contrast applies to much more than identifiability in heraldry.