A College of Arms "Mashup"


It's always interesting to me to see some of the on-line discussions about the English College of Arms in London, almost entirely by people who aren't affiliated with it, but you get such a wide range of opinions about the College, what it is, what they think it should be, how much it charges for its services, and on, and on, and on.

Admittedly, though, a couple of my favorite quotes about the College of Arms come from people who have been a part of, or worked closely with, the College.

Dealing with the College of Arms ought to be compulsive therapy for the impatient.
Quoted in The Heraldry Gazette, March 1997, p. 3

The Kings of Arms tend to be rather like oil tankers sailing in a determined and serene manner through the ocean of life, and as a result they take a long time to change course.
Conrad Swan, A King from Canada, p. 237

A recent Facebook discussion about the College of Arms has resulted in some discussion about the College of Arms and its defense, to the point sometimes of hyperbole, of its prerogatives and its statements, or as some would note, its overstatements of what its grants of arms are.  It seems some recent pamphlets put out by the College discuss such things as the "law of arms" in England, prompting others to ask exactly where this "law" is written down.

Which led heraldic artist Alexander Liptak to create and post this amusing rendition of the arms of the College, done with inspiration from the computer game Angry Birds: 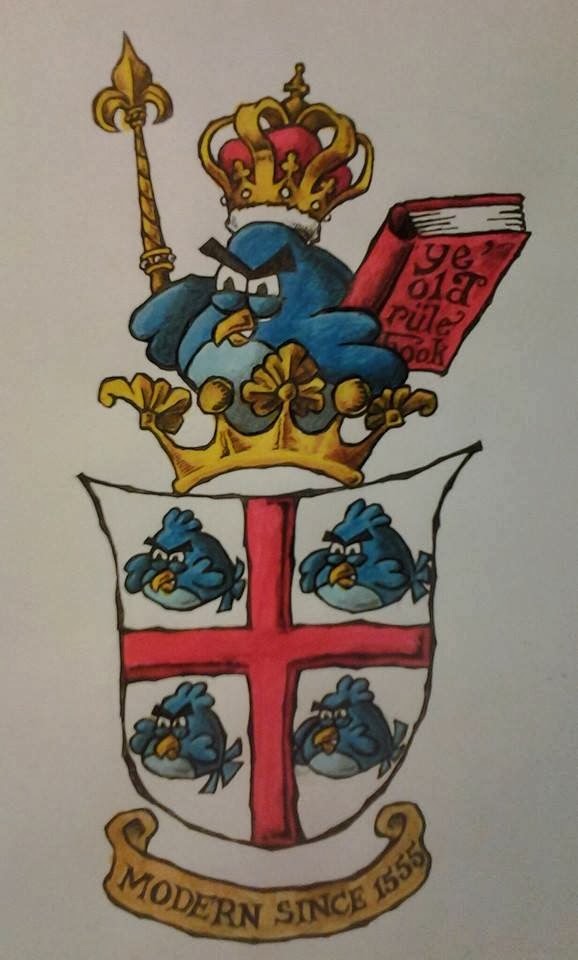 You gotta love it, don't you?

For those of you who may not recall the arms of the College of Arms, here's a more usual rendition of them:

Email ThisBlogThis!Share to TwitterShare to FacebookShare to Pinterest
Labels: College of Arms