... I have found it to be true: "You can find heraldry everywhere!"

In this specific instance, I had taken my lunch time and left the office where I work to walk to a nearby shopping center to see if I could find a couple of Christmas gifts for some family members.  And on my way, I passed a new hamburger joint that had recently opened.  (The Hopdoddy Burger Bar if you must know.  I haven't tried their burgers yet, but I may have to before long.)  And on some large panels covering part of the building, interspersed with the name of the Burger Bar and with its logo were this arms-like logo: 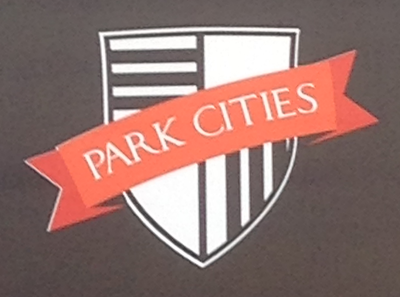 By way of some explanation, though the location of this shopping center is a little north of downtown Dallas, it is not "in" Dallas, but in one of two "island" cities (so-called because they are completely surrounded by the City of Dallas) often referred to as the "Park Cities," Highland Park and University Park.

As a logo it is, I suppose, reasonably distinctive.  As heraldry, it has some problems.  I would blazon the "coat of arms" here as Quarterly, 1, Argent three bars Sable, 2 and 3, Argent plain, and 4, Argent three pallets Sable.  (The red banner with the words "Park Cities" is, in my opinion, external to the shield and thus not really a part of the arms.  Though I could, and I know of others who might, argue otherwise.)

In any case, I found this another example of being able to find heraldry, or heraldry-like depictions, everywhere, even while walking down the sidewalk on my way to someplace that had nothing to do with heraldry.  And how cool is that?