New Heraldry in the News!


The town of Niagara-on-the-Lake has unveiled its new coat of arms recently, on the 200th anniversary of the razing of the town by American forces during the War of 1812.  (I remember, years ago - we won't discuss just how many years ago - driving through Canada on our way from Michigan to Massachusetts and seeing a brochure depicting the burning of a town - possibly this one - by American forces during the War of 1812, and noticed that the Americans portrayed in it seemed to be wild-eyed and all had sharpened pointy teeth!)

The arms, though too new to appear yet in the on-line Public Register of the Canadian Heraldic Authority, appear on the flag which was granted the town at the same time. 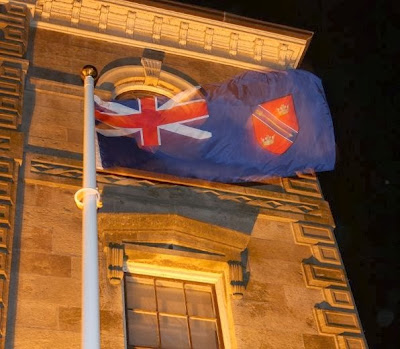 It is a beautifully simple coat of arms, and I have to commend both the town and the Canadian Heraldic Authority for the design.  (Though I know a few individuals who will probably quibble about the use of fimbriation outlining the bend to avoid the use of color on color.)

You can read more about the unveiling of the arms and flag by the Right Rev. Ralph Spence, Niagara Herald Extraordinary, as well as get a good idea of what the full achievement of arms looks like from the explanations of the various elements of it in the "Fact Box" with the article, on-line at the website of the Niagara Advance at http://www.niagaraadvance.ca/2013/12/12/town-unveils-new-flag-coat-of-arms